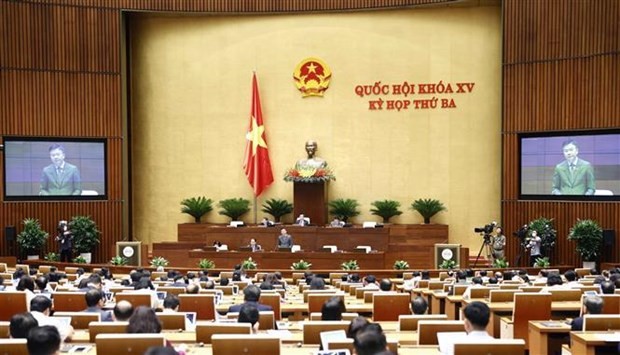 At the NA working session (Photo: VNA)
The proposal was conveyed by Chairman of the NA Committee on Legal Affairs Hoang Thanh Tung during the 15th NA’s ongoing third session on May 24. In the morning sitting, deputies discussed the proposed Law and Ordinance Building Program in 2023, and the adjustment of the 2022 program.

According to Tung, the NA Standing Committee is aware of the urgency to amend the Law on Land so as to remove difficulties in the implementation of the law; meet the requirements of mobilizing and effectively using land resources to promote production, business and socio-economic development; and create a foundation for amending, supplementing, and overcoming limitations and inadequacies in other relevant legal documents.

However, this is a big draft law with complex content that need careful study and preparation. On the other hand, the 13th Party Central Committee just conducted a review of the implementation of Resolution 19-NQ/TW on continuing to reform land policies and law at its fifth plenum in May this year, and more time is needed for the research and institutionalization of the Party's policy on the matter and subsequently the draft amended law.

Therefore, the NA Standing Committee also requested that the NA allow postponing the submission of the draft law to the fourth NA session. The draft will be discussed in the fourth and fifth sessions of the NA, and adopted in the sixth session.