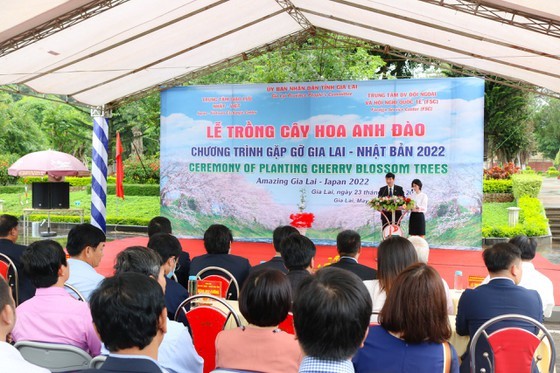 A ceremony of receiving and planting 24 cherry blossom trees

The ceremony is an activity in a framework of the "Meeting Gia Lai – Japan 2022" program and under events to mark the 90th founding anniversary of Gia Lai Province, contributing to tightening friendship and solidarity between the two countries.
Accordingly, the People’s Committee of Pleiku City coordinated with Japan - Vietnam Exchange Center and Center for Foreign Service and International Conference to organize the ceremony.

Speaking at the ceremony, the provicial leader said that the “Meeting Gia Lai – Japan 2022” program was a significant political and cultural event of the Central Highlands province, contributing to promoting the friendly and cooperation relations between Japan with Vietnam generally and with Gia Lai Province particularly.

Moreover, the program is also an opportunity to show the development potentialities and strengths of the province to Japan's organizations, businesses and localities; and boost people-to-people cultural exchange and cooperation ties between the Japanese and Vietnamese enterprises. 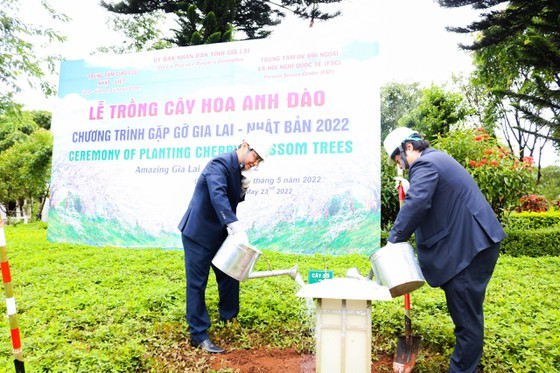 Two delegates plant a cherry blossom tree.
On the occasion of the 90th founding anniversary of Gia Lai Province, the sunrise country presented the Central Highlands province 24 Japanese cherry blossom trees, which is the national flower and symbolic flower of national spirit, strength, culture, and people of Japan.
These cherry blossom trees will be planted and grow up on the land that will become a symbol of Vietnam- Japan friendly and solidary ties.