Speaking at the handing-over ceremony in Hanoi, VUFO President Ambassador Nguyen Phuong Nga said over the past two week, both Vietnam and Cambodia are facing the complexity of the pandemic. The Vietnamese government and people are concerned about the developments of the pandemic in countries in the region, especially neighbouring nations. 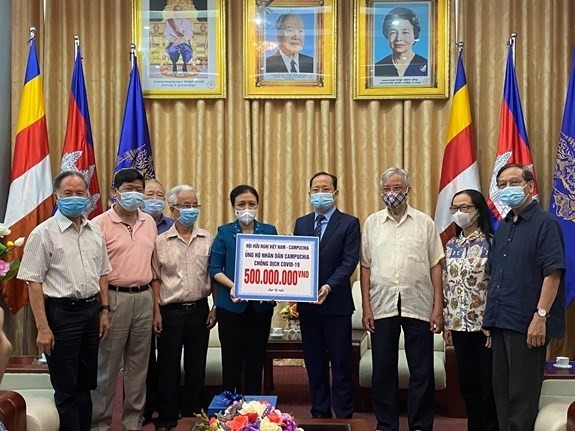 VUFO President Ambassador Nguyen Phuong Nga (fourth from left) presents VND500 million to Cambodian Ambassador to Vietnam Chay Navuth (Photo: VNA)
People of countries need to join hands to deal with the health crisis, she stressed.
Cambodian Ambassador to Vietnam Chay Navuth affirmed that the assistance reflects the solidarity and friendship between the two countries.
He affirmed that his country will use effectively the aid for its COVID-19 prevention and control.
The Vietnam - Cambodia Friendship Association launched a campaign to raise fund to support Cambodia people to fight COVID-19 during April 28 - May 7. The campaign received warm response from members of the association and its chapters nationwide.