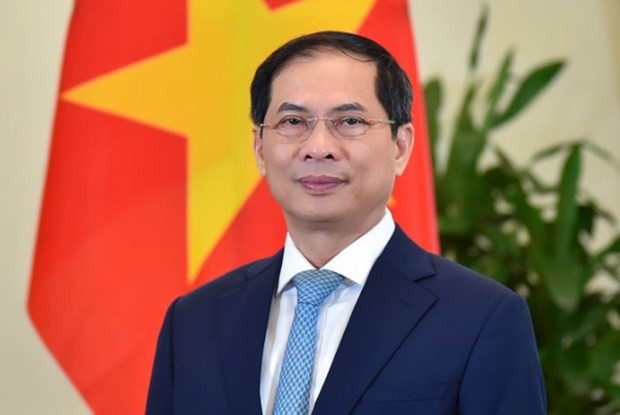 In his article entitled "77 years of Vietnamese diplomacy: Devoted to serving the Fatherland, serving the people," which was released on the occasion of the sector's 77th anniversary, FM Son noted that during the national defence and construction, diplomacy has been a strategic battlefield.
With strategic and clever policies, diplomacy made an important contribution to protecting the revolutionary government and the people after the August Revolution, FM Son underlined.

Along the political, military, economic, cultural fronts, the diplomatic sector helped enlist the great support and assistance of the progressive forces and the international community for the country’s just revolutionary cause, creating victories that brightened the nation's history, including the negotiations and signing of the Geneva Agreement in 1954 and the Paris Agreement in 1973.

After the country's reunification, the diplomatic sector continued contributing to efforts to lift embargo imposed on Vietnam as well as the Doi Moi (Renewal) process, according to the FM.

Vietnam has been an active member of more than 70 important multilateral organisations and forums.

With an expanding and deepening network of foreign relations, the country’s peaceful, stable and independent environment, sovereignty and territorial integrity have been firmly reinforced, while many import-export markets have been expanded, enabling the country to take advantage of many sources of capital, technology and knowledge for its industrialisation and modernisation, FM Son highlighted.

He noted that during the difficult period of the Covid-19 pandemic, health diplomacy and vaccine diplomacy have made important contributions to the successful implementation of the country's vaccine strategy, creating a prerequisite for the country to switch to safely and flexibly adapting to and effectively controlling the pandemic, and speeding up socio-economic recovery and development, and rise up after the pandemic.

Besides, he underlined the sector's strong performance in cultural and information diplomacy, as well as citizen protection activities abroad.

The FM attributed the success to the proper external policy of the Party and State, as well as the efforts of the whole Party, people and the entire political system, along with the close and effective coordination among diplomatic pillars and forces and sectors at all levels.

It is the nation's revolutionary cause that has nurtured the diplomatic sector's maturity and development, creating a special and unique Vietnamese diplomacy in the Ho Chi Minh era, said FM Son.

In the future, the diplomatic sector will focus on maintaining the peaceful and stable environment in parallel with resolutely and persistently safeguarding national independence, sovereignty and territorial integrity, while expanding and deepening relations with neighbouring countries, important partners and traditional friends, and taking full advantage of favourable international factors, he stated.

At the same time, the sector will renovate itself to seek new ways and areas to expand markets and mobilise external resources for national development, while promoting Vietnam’s role at important multilateral mechanisms to further enhance the international position and reputation of Vietnam, he underlined.