In particular, coastal guards have lately arrested two ships transporting about 130,000 liters of DO oil. Currently, the Coast Guard Region 4 Command is coordinating with functional units to strengthen the fight to prevent illegal DO oil trading and transportation in the Southwest Sea with a focus on the sea waters between Vietnam and Malaysia. 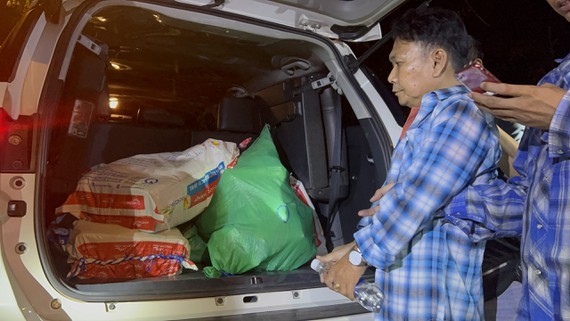 One of criminals in drug transportation case
Also this morning, the Investigation Police Department on Drug-related Crimes (C04) under the Ministry of Public Security said that in respect of the 268K case, C04 coordinated with functional units to smash the drug ring from Cambodia to Ho Chi Minh City for consumption in large quantities.
Through investigation, C04 policemen discovered a ring of illegal trading and transportation of narcotics from Cambodia to Ho Chi Minh City for consumption. A ring leader is a Cambodian man who has directed 52- year-old Tran Van Hai and 55-year-old Nguyen Thanh Vinh in Ho Chi Minh City to distribute to agents for consumption in the area through social networks.
Police investigators verified that after receiving drugs from Cambodia, criminals transported them and hid them in a warehouse on Ton That Thuyet Street in Ho Chi Minh City’s District 4 where they divided drugs into small packages and then sold them to Tran Trong Khoi, Le Minh Hao, Tran Ngoc Diep (Hao's wife) in HCMC and others following the direction of the muggers in Cambodia.
Prior, C04 staff cooperated with city peers and Coast Guard Command to catch Nguyen Thanh Vinh at Phu Xuan Commune in Nha Be outlying district on June 4 while Vinh was transporting drugs. Policemen seized 100kg of drugs in six sacks.
Another team of investigators arrested Tran Van Hai, seizing 1kg of synthetic drugs. Policemen raided a drug warehouse rented by Hai at 7 Ton That Thuyet in District 4 and seized an additional 3 kg and 2,000 pills of synthetic drugs.
For expanding the case, police caught Le Minh Hao and Vu Quoc Duy red-handed delivering and receiving drugs on June 5, 2022, seizing 100 packages of drugs. Policemen continued asking men to detain Tran Ngoc Diep. While searching the residence of the couple Hao – Diep, police seized 10kg of drugs.
On June 6, the special case committee arrested Tran Trong Khoi and Ly Pham Thanh Giau both 17 years old in Ho Chi Minh City, and then seized 1kg of drugs, 269 packages of drugs with the brand of Mercedes, 300g of ketamine, and one rubber bullet gun.
The special case committee has so far arrested 7 people and seized 115kg of synthetic drugs of all kinds and many other related documents. Initially, the criminals all admitted their crimes. Currently, C04 is continuing to coordinate with functional units to keep investigating the case.