According to police, a mentally ill man ran the ring while he was being treated in the hospital. Nguyen Xuan Quy, 38, is the leader of the drug trafficking ring at the National Psychiatric Hospital No 1 where the man was receiving treatment. 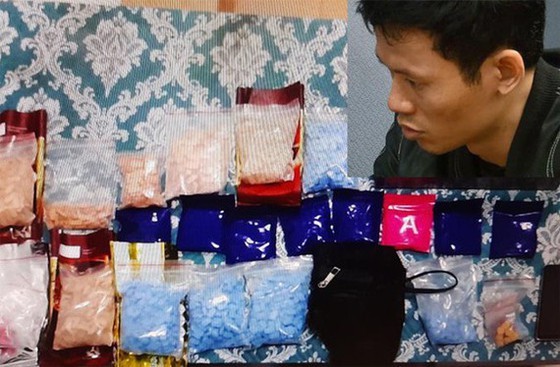 Police investigators also took criminal proceedings against Nguyen Anh Vu, a technician from the rehabilitation and traditional medicine department at the hospital, for not denouncing the crime.
According to the police's primary investigation, police officers found a group of criminals selling drugs in the hospital and Nguyen Xuan Quy was the ring's leader. Quy was taken to the hospital for treatment from November, 2018.
Jumping into an investigation, police identified Quy organized the ring in his treatment room in the hospital. He has built a close relationship with medical staffs in the hospital; therefore, he was free to come and go at any time he wanted. Quy even renovated a treatment room into a soundproof room and installed large speakers and laser lights to use it as a place to take and sell drugs.
According to police, the ring was operated in the hospital because of loose management and cooperation of medical staffs. Though some health workers did know the crime, they didn’t denounce it to police; worse, they gave keys to Quy so that he can easily travel in and out of the hospital.
Following the discovery of the crime in the hospital, a delegation group from the Ministry of Health worked with the hospital over the case. After that, inspectors decided to temporarily suspend some medical workers of the National Psychiatric Hospital No.1 from work. Under the decision, director Vuong Van Tinh, Dr. Do Thi Luu, head of the rehabilitation and traditional medicine department, nurse Ta Thi Them of the rehabilitation and traditional medicine department, where Quy was directly provided treatment, were suspended from work.
The ministry also asked the hospital to closely cooperate with police investigators on the case. Additionally, hospital managers must continue to verify responsibilities of teams and individuals involved in the case.
Police forces are furthering the ongoing probe into the case to verify the role of involved people. They have so far seized more than 6kg of drugs of various kinds, including ecstasy, methamphetamine and ketamine.