The seized exhibits
During the two days of September 28 and 29, 198 kilograms of smuggled gold were imported illegally into Vietnam. The ring leader and relevant subjects were identified.
The functional forces have seized 103 kilograms of gold, over US$2.8 million and VND26.7 billion (US$1.1 million) along with relevant equipment, devices and exhibits.

According to Lieutenant General To An Xo, this is a giant gold smuggling ring related to many subjects in many provinces and cities across the country for a long time. 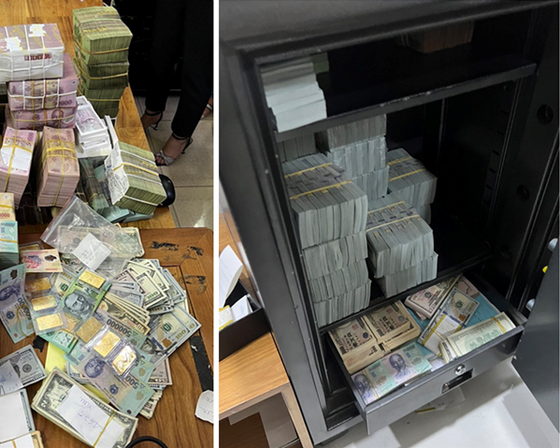 The foreign currencies and pieces of gold are found.
Accordingly, the subjects bought foreign currencies, mostly the US dollar in Vietnam with the purpose of buying gold in Cambodia and consuming them in Vietnam.
Currently, the Economic Police Division under the Ministry of Public Security is coordinating with the Supreme People's Procuracy of Vietnam to evaluate documents and evidences, classify subjects for strictly handling, further investigation, revoking the exhibits in accordance with the law.