The illegal immigrants, including four adults and three children, were seized on early April 25 at Sin Thau commune, Muong Nhe district, while attempting to enter Vietnam.

At the A Pa Chai border post, they confessed that they are members of two families, and committed the violations in fear of undertaking Covid-19 quarantine. They were then sent to quarantine in line with regulations. 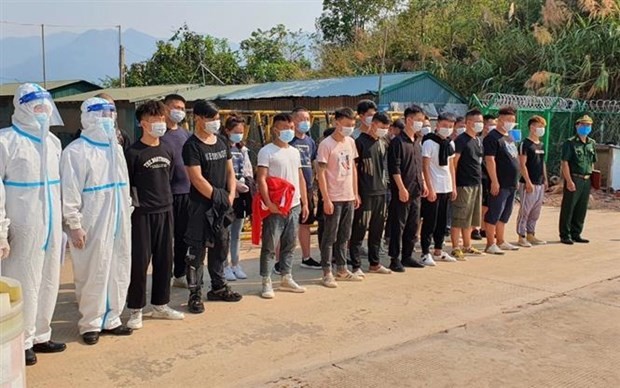 Earlier on April 24, Dien Bien authorities handed over 20 Chinese people involving in two cases of “brokering illegal entry” that were uncovered in early April.
At 15pm of April 1 in Ca Hau village, Na U commune, Dien Bien District, border guards in the Tay Trang international border gate arrested Nguyen Van Sinh, born in 1988 and residing in Pom Pot commune of Dien Bien district who was guiding two taxis carrying nine Chinese from Pom Lot commune to the border to hand over to another suspect in Na U commune of Dien Bien District before crossing the border to China for VND8 million for each person.

On April 6, 10 Vietnamese and nine Chinese were arrested in the Vietnam-Laos border in Ca Hau village of Na U commune while trying to exit Vietnam illegally. Two more Chinese who were hiding in the border were also seized on the same day. They said that they hired Vietnamese people to drive them with motorbikes to the border of Dien Bien for nearly VND9 million per person.

After being detained, the 20 Chinese citizens were then sent to quarantine before being handed over to Chinese authorities on April 24.