Also on the same charge, Phan Chi Dung, born in 1957 and the former Director of the Light Industry Department at the Ministry of Industry and Trade (MoIT), got nine years in jail under Article 219 of the 2015 Penal Code’s Clause 3. 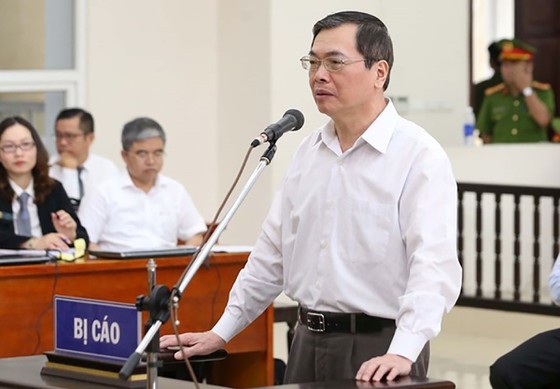 Ex-minister of industry and trade Vu Huy Hoang (Photo: VNA)
In line with Article 229 of the 2015 Penal Code’s Clause, eight other accomplices of Hoang, who are former Ho Chi Minh City officials, were sentenced to between 30 months and 7 years in prison for “violating regulations on land management.”. Three of them have already been convicted in other cases for “violating regulations on the management and use of State assets, causing losses and wastefulness”, thus their aggregate jail terms adding to from six to 14 years.
Among them, former Vice Chairman of the municipal People’s Committee Nguyen Huu Tin, born in 1957, will have to serve a total 13 years and six months in prison.
In addition to the prison sentences, the trial panel also pronounced the handing over of the land lot at No 2-4-6 Hai Ba Trung street, Ho Chi Minh City, to the People's Committee of Ho Chi Minh City for handling according to the law.
Also according to the verdict of first instance, Ho Thi Kim Thoa, former Deputy Minister of the MoIT, is an accomplice in the case. However, Thoa has fled so the Ministry of Public Security’s investigation police agency has issued a decision to suspend the investigation of the criminal case against her and put her on the wanted list.
According to the indictment from the Supreme People’s Procuracy, the Saigon Beer - Alcohol - Beverage JSC (Sabeco), which is under the MoIT’s management, was given more than 6,000 sq.m of land at the No. 2-4-6 on Hai Ba Trung street in downtown HCM City for production and business purposes.
However, Hoang, Thoa, and Dung directed subordinates at the ministry and Sabeco to carry out procedures for using land use rights and Sabeco's money as capital contributions to set up Sabeco Pearl, a joint venture between the firm and a number of private enterprises, to implement a project building a hotel, a trade and convention centre, and office space for lease on the land.
After Sabeco completed legal procedures for the joint venture’s investment and proposed the HCM City People’s Committee approve the addition of officetel and housing functions to this project, the MoIT ordered the company to divest its entire stake in this project.
This was illegal and resulted in a loss some  US$112.5 million to the State.