Nguyen Thi Bich Hang, chief accountant, was sentenced to three and a half years behind bars for “violating accounting regulations, causing serious consequences.”

The remainder faced the charge of “smuggling” and received prison terms ranging from four to 13 years. Tran Ngoc Anh, deputy general director of the company, was sentenced to 13 years. 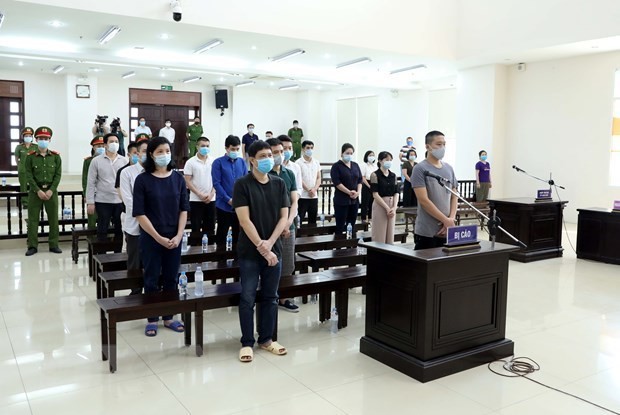 At the court (Photo: VNA)

The judge also decided to give VND774 million (US$33,560) collected during raids at the company and money in seven banking accounts belonging to Doan Manh Phong, one of the suspects in the case, to the public fund, and asked the defendants charged with “smuggling” to return more than VND221 million they had taken illegally.

Phong and other suspects in the case - Bui Quang Huy (General Director), Ngo Xuan Su, Do Van Hung, Cao Tuan Hung, Nguyen Hoang Son, and Le Xuan Dung - are on the run and have been put on the wanted list.

Regarding the charge of smuggling, the indictment said that from January 2014 to May 2019, Bui Quang Huy personally directed the company’s staff to conduct 2,502 illegal transactions involving the purchase and sale of more than 255,000 mobile phones and electronic equipment worth over VND2.92 trillion (US$126.7 million) in total with 16 suppliers in Hong Kong (China).

Huy then engaged smuggling rings to transport the goods from Hong Kong (China) to Vietnam and hand them over to the Nhat Cuong Company to sell, with a total of 52,811 products sold for total of VND307 billion.

As for the violations of accounting regulations, causing serious consequences, the indictment said that in 2014, Huy instructed the company’s employees to set up two different accounting systems, one for internal use and another fake one for public reporting.

The procuracy said that this is banned under Article 13 of the law on accounting, which caused a loss of nearly VND30 billion in tax revenue to the State.