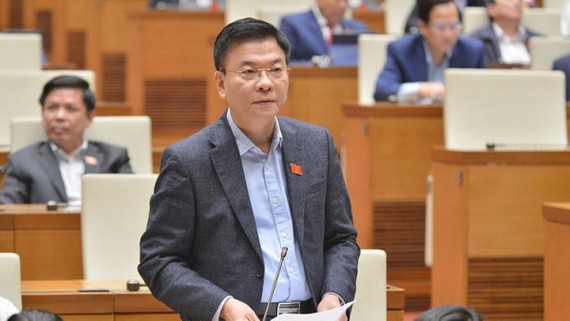 Minister of Justice Le Thanh Long
In preparation for the fourth session of the fifteenth National Assembly, in response to opinions of voters in the Northern Province of Hai Duong to increase the maximum penalty to death for crimes of major economic corruption causing loss of State property, the Minister stated that the 2015 Penal Code has devoted chapter XXIII to stipulating crimes related to position including 15 articles (from article 352 to article 366). The laws of this chapter are divided into two sections, in which section 1 deals with crimes of corruption, section 2 deals with other crimes related to position and 1 article on abusing one's position.
In particular, two laws on the crime of embezzlement of property (article 353) and the crime of accepting bribes (article 354), both stipulates the death penalty as the highest one.
Da Nang voters commented that the point c in clause 3 of article 40 of the Penal Code stipulates not to execute the sentence against the convict if a person sentenced to death for embezzlement or taking bribes that actively surrender at least three-quarters of the embezzled assets, receives bribes and actively cooperate with authorities in detecting, investigating, handling crimes.
Voters were considering that this regulation is unreasonable and people will exploit the loophole in the anti-corruption mission, making corrupt acts more sophisticated, more tricks, and higher levels of corruption; accordingly, voters proposed the Ministry of Justice submitted to the National Assembly for consideration and amendment of this regulation.
According to Minister Le Thanh Long, the above regulation to institutionalize the policy of limiting the death penalty has been confirmed in the Resolution 49 of 2005 of the Politburo on judicial reform to 2020; at the same time, the regulation facilitates maximum recovery of assets due to corruption.