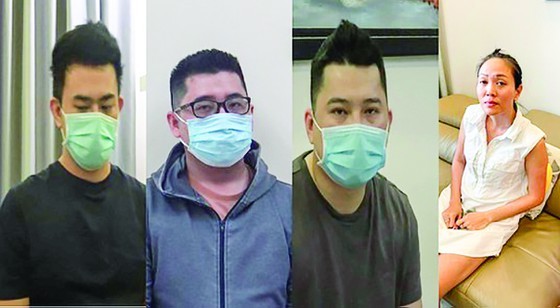 The three worked with other criminals to defraud over 160 victims of around VND35 billion (approx. US$1.5 million) via a virtual currency exchange platform.

A month before, DoPS had successfully destroyed a gambling ring of more than $3.8 billion under the form of investment in virtual currency exchange platforms.

The police reported typical tricks that these criminals are using. First they would organize free meetings and discussions where participants have a chance to draw lucky numbers and win prizes. These easily obtained prizes attract investors to spread the good news to their acquaintances. This, in turn, increases the number of people joining in the activity and pouring money in.

Obviously, those criminals spend nothing as they take the money from this participant to pay for another. Meanwhile, the activity is widely spread free of charge to catch the attention of thousands of new investors. To be more convincing, the criminals establish a virtual currency exchange platform with the name extremely similar to those of foreign millionaires, making it seemingly more reliable.

Another infamous trick is to set up a fake foreign millionaire who supposedly owns huge corporations and is leading a luxurious life. This figure is invited to deliver speeches in meetings and discussions for novice investors. With the guarantee of refund from this person, participants feel at ease pouring their money into virtual currency exchange platforms.

One such victim, Ms. N.T.N.V. (born in 1990 and living in Binh Thanh District, HCMC) recalled that in June 2021, her friend introduced her to an insured e-platform named W, where she could use her bank account to buy USDT (its own virtual currency) to turn in to Gold (1 USD = 1USDT = 1 Gold). She was told after buying an insured package of 4 percent per week, she could earn 8 percent for that week, with a guarantee to refund if she loses the game.

Thanks to continuous winning, she was more confident to put hundreds of US dollars into this platform. Suddenly in October 2021, her account was locked and she could not withdraw any money. Seeing that many met the same situation, she and those victims decided to report the case to the police.

Lieutenant Colonel Vo Duy Thang, Head of the Special Police Squad under the Criminal Police Division (PC02), warned that the action of exchanging real money to virtual one without any legal protection is a highly risky activity.

Lawyer Nguyen Duc Chanh from HCMC Bar Association stated that Section 2 of Article 17 in the Law on the Vietnam State Bank 2010 regulates that the paper notes and metal coins issued by the State Bank are legal payment means in the whole country.

In addition, Sections 6 and 7 of Article 4 in Decree No.101/2012, with amendments by Decree No.80/2016/ND-CP, regulates that legal cashless payment methods consist of checks, payment orders, collection orders, bank cards, and other payments means according to the State Bank’s regulations.

Obviously, all cashless payment means unlisted in the above article are illegal in Vietnam, including digital money or virtual currency.

Without sufficient information, many citizens are not aware that their investment of over VND5 million ($220) in virtual currency could be considered as a gambling activity and be prosecuted, besides being a victim of a scam.