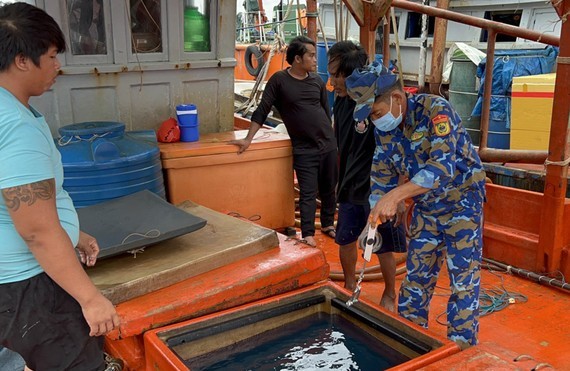 Accordingly, at 15:00 p.m. on November 20, the Tho Chu Border Guard patrol team checked the two fishing boats of CM - 92519.TS and KG - 90095.TS, which had shown signs of suspicion. These boats have 7 crew members in total, including their captains and chief engineers with no diplomas or certificates as regulated.

At the examining moment, the boats are transporting 62,000 liters of DO oil, but their captains could not display any valid invoices or related documents. Therefore, the patrol team made a record, clearly detailing the law violations. The police also temporarily seized 5 mobile phones and 1 tablet for investigation, escorted both boats to An Thoi Port of Phu Quoc City to hand over to functional agencies for proper handling.

As reported by the anti-smuggling forces in the Southwest sea water, millions of liters of fuel are illegally traded each year to evade taxes. This is done based on the price differences between Vietnam and its neighboring countries.

The common trick is to use fishing boats going to the bordering sea waters for purchases of oil to evade taxes. This illegally traded fuel is then sold directly to other fishing boats.