Accordingly, Huong will serve as Planning Officer in the Office of Military Affairs under the Department of Peace Operations at the UN headquarters in New York.

As the second Vietnamese military officer to qualify for working at the UN headquarters, Huong passed four qualification rounds with flying colors.

He used to work as a Training Planning Officer at the UN Multidimensional Integrated Stabilisation Mission in the Central African Republic (MINUSCA) from 2016-2017 and a Military Observer at the UN Mission in South Sudan (UNMISS) from 2018-2019.

At the event, Deputy Defence Minister Sen. Lieut. Gen Nguyen Chi Vinh asked Huong to make the best use of his new position to offer effective consultations to Vietnam during the country’s participation in the UN peacekeeping activities. 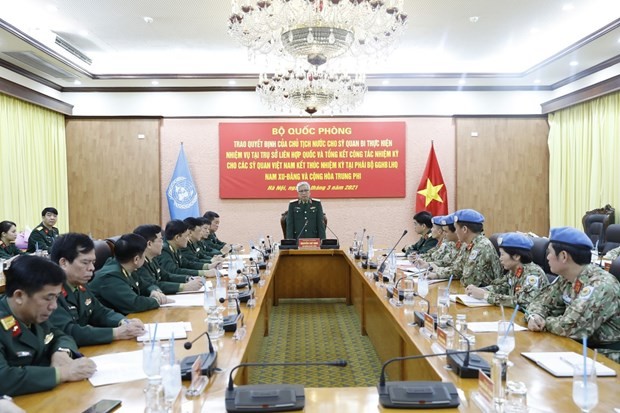 Lieut. Col Tran Duc Huong speaks at the event (Photo: VNA)
On the occasion, Vinh also lauded nine Vietnamese officers for accomplishing tasks at the MINUSCA and UNMISS. He wished that they would continue making active contributions to the Vietnam Department of Peacekeeping Operations, as well as sharing experience with Vietnamese officers who are assigned to join peacekeeping missions of the UN in the time ahead.

Since June 2014, Vietnam has sent 180 officials and officers from the Defence Ministry to the MINUSCA, UNMISS and the Department of Peace Operations at the UN headquarters. Their contributions have been welcomed by the UN as well as the public at home and abroad.