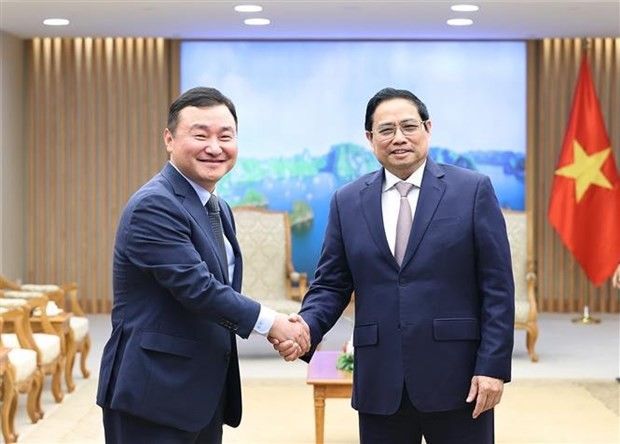 PM Pham Minh Chinh (R) and Samsung Electronics CEO Roh Tae-Moon at the reception in Hanoi (Photo: VNA)
He suggested that Samsung continue to play a leading role in supporting personnel training and capacity building for Vietnamese enterprises so that more of them will be able to join Samsung’s supply chain and development ecosystem.

The Government leader highlighted the outstanding development of the strategic cooperative partnership between Vietnam and the RoK in all fields. He noted that the RoK is now the third largest trade partner of Vietnam, with bilateral trade value reaching US$78 billion in 2021, accounting for 11.6% of Vietnam’s total foreign trade.

The RoK is the largest foreign investor in Vietnam with 9,383 valid investment projects worth nearly $80 billion, he said, describing Samsung’s investment in Vietnam as a bright example.

“The Vietnamese government is committed to creating the best possible conditions for foreign investors in general and Samsung in particular,” Chinh said, pledging to seriously consider and actively handle Samsung’s proposals, including the training of human resources to meet the requirements of enterprises and investors.

He also called on Samsung to continue giving feedback on Vietnam’s policies, institutions and mechanisms, and act as a bridge to bring more investors from the RoK and over the world to Vietnam, thus diversifying supply chains.

The Samsung executive appreciated Vietnam’s efforts and measures to put the pandemic under control and restore socio-economic development.

He thanked the Government and agencies of Vietnam for their support which he said helped Samsung overcome pandemic-caused difficulties and created a favourable environment for the group’s operations amidst a changing world.

He informed PM Chinh that Samsung Vietnam earned $34.3 billion from exports in the first six months of 2022, up 18% from the same period last year, adding that the company aims for $69 billion in export turnover this year and plans to invest an additional $3.3 billion in Vietnam.

According to Roh, Samsung Electronics is preparing for the trial production of Flip-chip Ball Grid Array in Vietnam and commercial production is slated to begin in July next year at its factory in Thai Nguyen province, northern Vietnam.

The group also plans to launch a R&D centre in Hanoi in late 2022 or early 2023, which will serve not only Vietnam but also the entire Southeast Asian region.

The Samsung CEO added that the group will help improve competitive capacity for 50 Vietnamese suppliers, and promote cooperation with Vietnamese universities and research establishments.