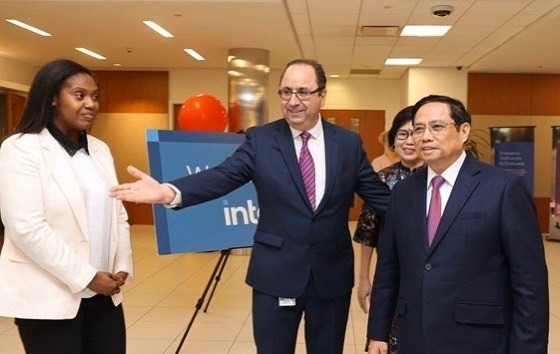 PM Pham Minh Chinh (right) visits Intel on May 17. (Photo: VNA)
At the meeting with the Vietnamese Government leader, Intel’s Executive Vice President Keyvan Esfarjani underlined the significant role of Vietnam in the company's supply chains and highlighted Intel Vietnam’s highest quality award in 2021 as an indication of the factory’s excellent human resources.
The Vice President also highly regarded the country’s favorable infrastructure and its skilled workforce, and described Vietnam as a potential destination for tech firms to expand their operations, especially when firms like Intel want to diversify their supply chains.
PM Chinh congratulated Intel on its achievements and thanked the corporation for its investments in Vietnam. He affirmed that the country has been working on Intel’s proposals and hoped that the corporation would invest further in other provinces beyond HCMC. 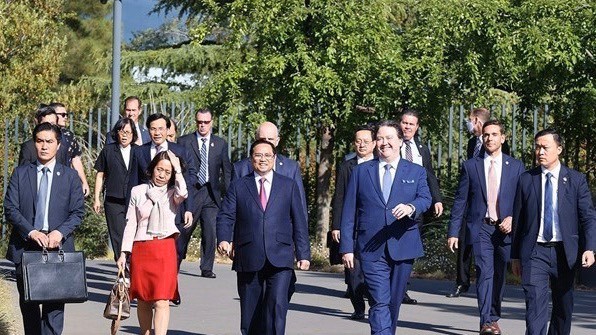 PM Pham Minh Chinh (front, centre) visits Apple's headquarters on May 17. (Photo: VNA)
At the meeting with Apple’s CEO Tim Cook, the PM underlined the cooperation in trade, investment and finance as the driving force for a robust US-Vietnam Comprehensive Partnership.
He said the Vietnamese Government is committed to creating a fair, transparent and market-based business environment to help US firms and investors gain ground in Vietnam.
He said Vietnamese customers of all ages love Apple products and their interest would continue to rise thanks to the growth of the global digital economy.
He also expressed delight at the fact that Vietnam has become more involved in the global supply chains. Although Apple doesn't directly have their plant in Vietnam, the country has 31 companies with 160,000 workers that are producing and assembling electronic parts and equipment for Apple products.
He requested the corporation continue to step up its business activities in Vietnam and introduce its products to a wide range of customers. He hoped the country would soon become Apple's model market in Asia.
Tim Cook thanked Vietnam for creating a favorable business environment for Apple's operations. He said the company wants to extend its supply chains in the country and involve capable domestic firms in Apple's supply chains.
The CEO also affirmed that he would consider increasing the number of domestic suppliers and raising the rate of domestic products used in production lines.
He hoped that the Vietnamese Government would introduce even more favorable policies to encourage the investments of US high-tech firms. 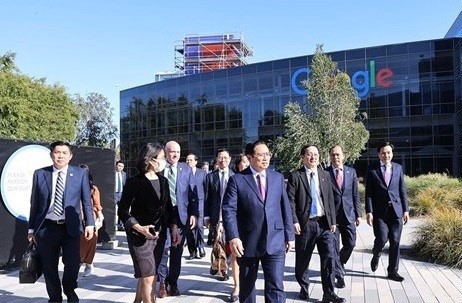 PM Pham Minh Chinh on a trip to Google's headquarters on May 17. (Photo: VNA)
During PM Chinh's visit to Google headquarters, Rick Osterloh, Senior Vice President of Devices and Services at Google, said the corporation wants to make its higher contribution to Vietnam’s economic growth and a sustainable digital eco-system.
The Vietnamese leader appreciated the cooperation between Google and Vietnam and welcomed Google's new plans in the country amid digital transformation.
He requested Google continue to support Vietnam in high-tech fields and step up programs that help Vietnamese firms in digital transformation, thereby contributing to the development of digital government, digital economy, and digital society.