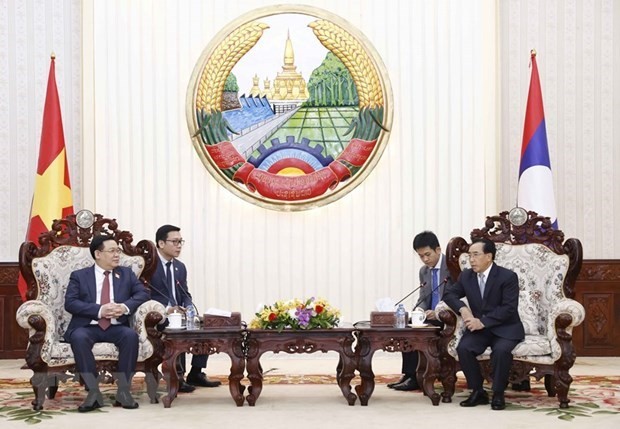 They expressed delight at the development of cooperative ties between the two countries over the past years and appreciated that the two sides kept up regular exchanges of high-ranking delegations, including the Lao Prime Minister's official visit to Vietnam earlier this year and the bilateral meeting between the two PMs on the sidelines of the ASEAN-US Special Summit in the US last week.
Regarding the orientation to strengthen the bilateral cooperation in the future, they stressed that the two countries need to coordinate to seriously implement high-level agreements, including the results of the 44th meeting of the Vietnam–Laos Inter-Governmental Committee on Bilateral Cooperation held in Hanoi in January, the agreement on Vietnam-Laos Strategic Cooperation during the 2021-2030 period and the agreement on bilateral cooperation between Vietnam and Laos during the 2021-2025 period.

The two sides agreed to continue efforts to search for breakthrough solutions to promote economic cooperation to become a real pillar in the relations between the two countries, in line with the special Vietnam-Laos relations; increase cooperation in trade, investment, digital economy, finance and banking, and connection between the two economies, including infrastructure and mechanism connection. Attention should be paid to promoting cooperation in clean and hi-tech agriculture.

They also suggested having effective measures to deal with difficulties and obstacles for businesses and important cooperation projects between the two countries, such as the Laos-Vietnam Friendship Park in Vientiane, wharves 1, 2 and 3 of Vung Ang port, Hanoi-Vientiane Expressway and Nong Khang Airport in Huaphanh province of Laos.

They agreed to continue to enhance cooperation in other important fields, including national defence and security, border, education and training, labour, science and technology, culture, sports, tourism, people-to-people diplomacy and cooperation between localities of the two countries.

They agreed to continue to closely coordinate and support each other at multilateral forums, especially at the UN, the Association of Southeast Asian Nations (ASEAN) and sub-regional cooperation mechanism.

Chairman Hue congratulated the Lao PM on the positive results that the Lao Government gained over the past years in pandemic prevention and control, maintaining socio-political stability, reopening the country and starting to welcome back international tourists from May 9.

He affirmed that the Vietnamese NA attaches great importance to the task of building and completing mechanisms and laws to meet the reform cause and international integration requirements; and always supports, supervises and promotes the implementation of cooperation programmes and projects between the two governments.

PM Phankham spoke highly of the Vietnamese top legislator's visit for the development of the special relations between the two countries and for cooperation and trust between the two NAs.

He congratulated the great achievements gained by the Vietnamese Party, State, NA and Government, particularly in effective prevention and control of Covid-19 and socio-economic recovery and development.