The Okeechobee Clean Energy Center was designed to use the fossil fuel natural gas when it opened two years ago among the lakes of central Florida. Now the power plant’s owner, NextEra Energy, is preparing it to handle a second fuel: hydrogen.

Hydrogen burns like natural gas without the carbon dioxide emissions and can be produced by separating water molecules using electricity. This excites engineers pursuing a solution to the variability of solar and wind power as it spreads across electric grids.

They say surplus renewable electricity produced during hours of slack demand can power electrolysis machines to make hydrogen, eventually providing a store of carbon-free energy for dispatch when demand is strongest.
The $65m Okeechobee pilot project will “utilise solar energy that would have otherwise been clipped” to create hydrogen to replace some natural gas, Rebecca Kujawa, chief financial officer at NextEra — which last year briefly overtook ExxonMobil as the most valuable US energy company — has said.

But producing hydrogen, storing it and then using it to generate electricity, a process known as “power-to-gas-to-power,” is inefficient and expensive. 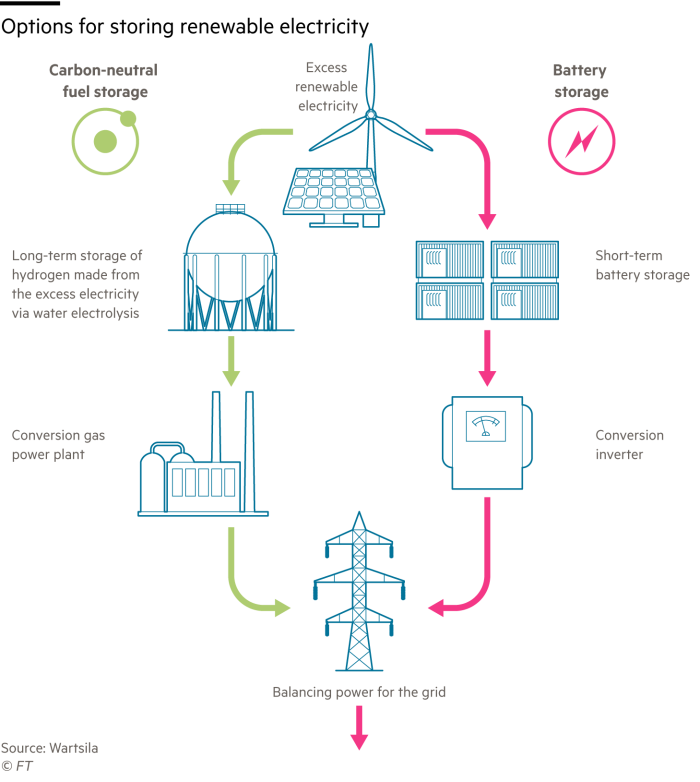 Energy is lost both in breaking the molecular bond between hydrogen and oxygen in water and in burning the resulting hydrogen in turbines. The round trip returns less than 40 per cent of the electricity put in at the start, according to Dharik Mallapragada, research scientist at the Massachusetts Institute of Technology Energy Initiative.

“Using power to make hydrogen to make power is in most cases really dumb, because there are so many losses involved in the cycle,” said Thomas Koch Blank, senior principal at Rocky Mountain Institute, a clean energy think-tank.

Rapid-starting natural gas power turbines have become the go-to generation source for grid operators looking to keep the lights on during heatwaves and winter freezes.

Renewable, or “green” hydrogen could perform the same role but it is not cheap. Even if production costs fell more than two-thirds to $1 a kilogramme, the price in energy terms would be $8 per million British thermal units, three times as costly as benchmark US natural gas, according to Morgan Stanley estimates. 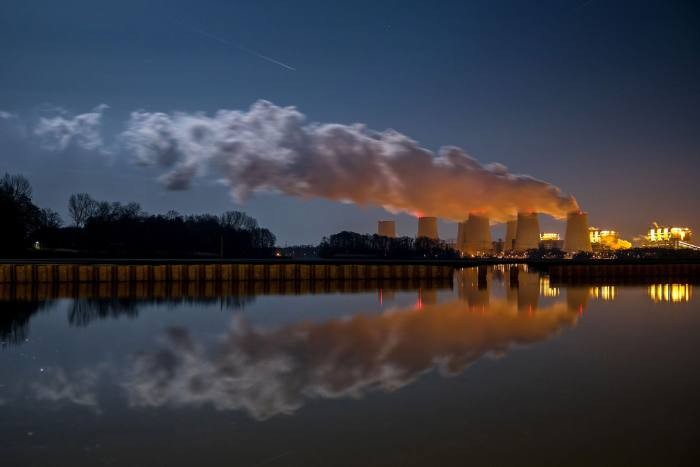 But with proponents arguing that hydrogen will be indispensable for the world to cut carbon emissions enough to avoid catastrophic climate change, projects are being launched across the US power sector to prove it can work.

Los Angeles, which under California law is required to use 100 per cent carbon-free energy by 2045, will convert a coal-fired plant it operates in Utah, initially to natural gas but then to hydrogen. The power station’s newly ordered turbines will be able to take a 30:70 blend of hydrogen and gas by 2025 and only hydrogen by the 2045 deadline, according to manufacturer Mitsubishi Power.

Mitsubishi and a partner have proposed a nearby facility to store green hydrogen sufficient to generate 150,000 megawatt-hours of electricity, which could supply 5m average US homes for a day.

“Hydrogen is that one technology where you can actually do seasonal storage,” said Paul Schultz of the Los Angeles Department of Water and Power. “All of this amount of over-generation that you potentially have in the spring and the fall can be used when you are renewable resource-poor during the summer and the winter.”

Schultz acknowledged that a hydrogen blend would cost more than natural gas, “but we have an environmental commitment to this”. He said the city had approached the US Department of Energy about securing low-cost federal funds to help finance the project, declining to specify the amount.

Paul Browning, chief executive of Mitsubishi Power Americas, said that while the cost of so-called green hydrogen was expensive compared with natural gas, it was competitive with other forms of electricity storage. 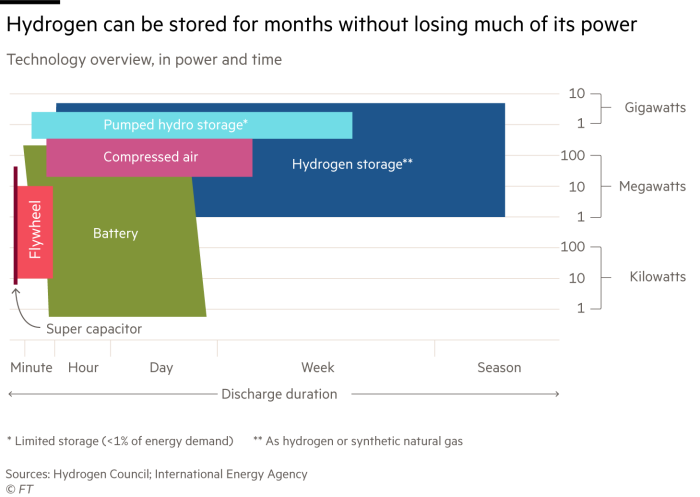 “Keep in mind, what we're really targeting is renewable power that today is 100 per cent wasted when it gets curtailed,” he said. “We know we can do better than that.”

The need for long-term storage will become more acute if renewables become the lion’s share of the generation mix. Solar and wind do not run all the time, while lithium-ion batteries empty within hours.

It would be possible to achieve a zero-carbon grid without thermal power plants by hugely overbuilding solar, wind and battery facilities, but California could reach its goals consuming far less land and billions fewer dollars by pursuing a path of power to gas, according to a study by Wartsila, a power technology company.

Elsewhere, New York-listed New Fortress Energy has launched a business to make green hydrogen for sale to the power, industrial and transport sectors, along with the less scarce “blue” hydrogen which is made using natural gas.

German utility Uniper hopes to use renewable electricity produced during the most prolific four hours of each day to make hydrogen for storage in underground structures in Hamburg, which were previously used to hold natural gas.

The hydrogen could then be tapped for trading, selling to industrial clients or generating electricity via a “peaker” plant that could supply electricity back to the grid — although the project is dependent on securing government subsidies, according to chief executive Andreas Schierenbeck.

FT Series: Hydrogen — Fantasy or fuel of the future? 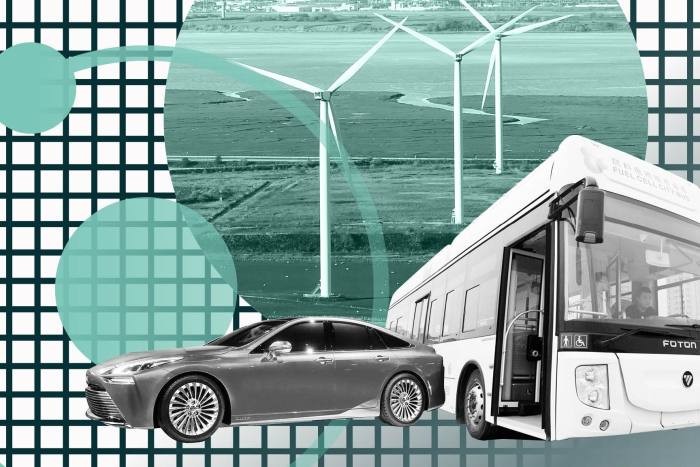 The Hydrogen Council, an industry group, said in a 2017 report that 250 to 300 terawatt-hours a year of surplus solar and wind electricity could be converted to hydrogen by 2030, with more than 20 power plants generating a combined 100TWh-200TWh of electricity from clean hydrogen. In comparison, renewables will generate almost 8,000TWh worldwide this year, according to the International Energy Agency.

“The intermittency of renewable energy is a problem; some large storage container is required to smooth out the output from wind and solar, and hydrogen is just that very large container,” said Daryl Wilson, executive director of the Hydrogen Council, whose membership includes some of the most energy intensive companies in the world and oil producers such as Saudi Aramco and BP.

NextEra, which did not respond to requests for comment, is starting small at Okeechobee with a 20MW electrolysis system. A regulatory filing revealed the plant shares a transformer with at least two adjacent solar farms NextEra has constructed.

The company, the largest US utility by market capitalisation, has recently disclosed other ventures, including a $20m installation to create hydrogen with solar power and feed it to a fuel cell to create electricity.

In all, NextEra had about 50 potential green hydrogen projects in the pipeline to serve the power, transportation and industrial sectors, John Ketchum, president of its bulk-power division NextEra Energy Resources, said late last year.

“We see hydrogen as really a long-term solution,” he told analysts, saying that eliminating the last 15 per cent of carbon from electricity supply “gets very expensive to do with batteries, much cheaper and more manageable to do with hydrogen.”

The colours of the hydrogen rainbow 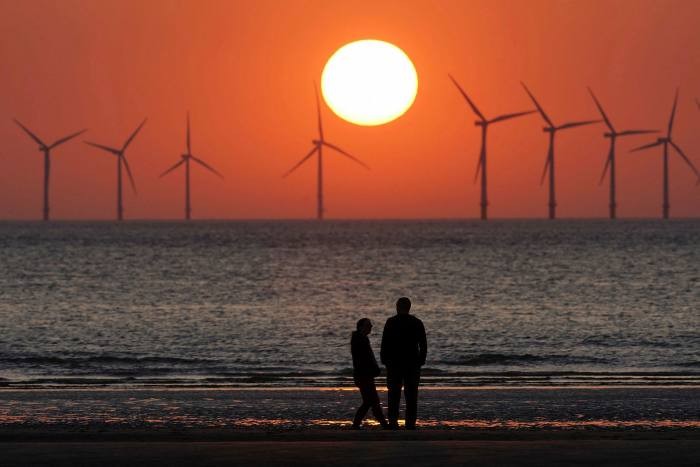 Green hydrogen Made by using clean electricity from renewable energy technologies to electrolyse water (H2O), separating the hydrogen atom within it from its molecular twin oxygen. At present very expensive.

Blue hydrogen Produced using natural gas but with carbon emissions being captured and stored, or reused. Negligible amounts in production due to a lack of capture projects.

Grey hydrogen This is the most common form of hydrogen production. It comes from natural gas via steam methane reformation but without emissions capture.

Brown hydrogen The cheapest way to make hydrogen but also the most environmentally damaging due to the use of thermal coal in the production process.