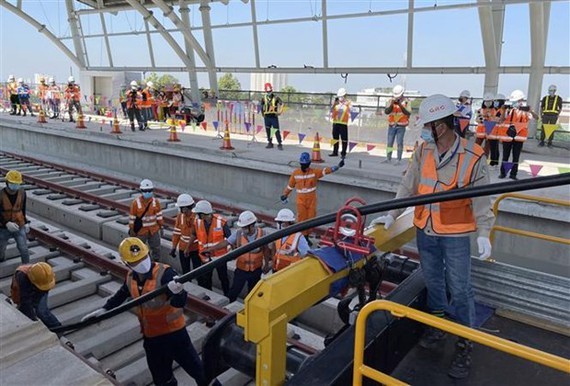 Workers on the construction site of the Metro Line No. 1 Project
Regarding the current works of the Metro Line No. 1 linking Ben Thanh in District 1 to Suoi Tien Theme Park in Thu Duc City, the Management Authority for Urban Railway of Ho Chi Minh City (MAUR) said that the Ben Thanh Terminal bidding package has the largest number of engineers and workers compared to other ones. However, all the people involved in the project have patiently performed their tasks along with following the Covid-19 prevention and control measures.

As for the rest bidding packages, the construction progress has been slow, even some construction sites have to be halted the operation due to a shortage of materials and equipment.

Besides, the project's sub-contractors have to comply with the regulations of the “One route – Two destinations” model causing difficulties in mobilizing workers to work on the construction sites.