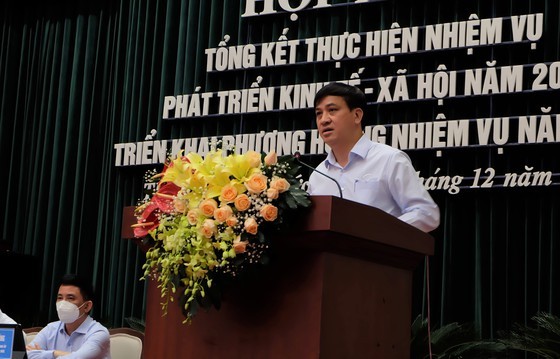 Yesterday, the People's Committee of Thu Duc City held a conference to review the implementation of the socio-economic development tasks in 2021 as well as orientation for 2022.
Speaking at the conference, Standing Vice Chairman of the People's Committee of Ho Chi Minh City Le Hoa Binh assessed that Thu Duc City has completed synchronous operation of the administrative apparatus after its establishment; at the same time, the city has effectively implemented the prevention of Covid-19 epidemic.
According to Mr. Binh, the theme for Ho Chi Minh City's 2022 is Safe adaptation, flexibility, effective control of the Covid-19 epidemic, improving the quality of urban government construction, improving the investment environment to help businesses; therefore, he asked Thu Duc City to develop and soon develop a plan to implement this topic.
In particular, he noted that leaders of Thu Duc City and the entire machinery of the state including officials and experts in districts in Ho Chi Minh City and Thu Duc City must join hands to help businesses.
Thu Duc City borders Binh Duong and Dong Nai provinces and has a wholesale market. Vice Chairman Binh directed Thu Duc City to coordinate closely with neighboring localities in the prevention and control of epidemics in addition to increasing people’s awareness about the fight against the virus in the city.
Mr. Binh stressed social security care, expecting that Thu Duc City would pay attention to solving petitions on social security by developing a plan to take care of poor and near-poor residents and social welfare brackets in Tet holidays (the Lunar New Year) in 2022 so that people are encouraged to well implement local guidelines and policies on epidemic prevention and economic recovery.
Many export processing zones, industrial parks, and high-tech parks are located in Thu Duc City with scores of experts and workers; thereby, leaders in leaders in Thu Duc City must pay heed to salary, bonus, and care, Tet gifts for workers who return to their hometown to reunite with their relatives in Tet holidays.
He also asked Thu Duc City to pay more attention to workers’ living environment in addition to looking for solutions to move people out of crowded areas where too many people are living. At the same time, the district must develop housing programs for workers and low-income people. 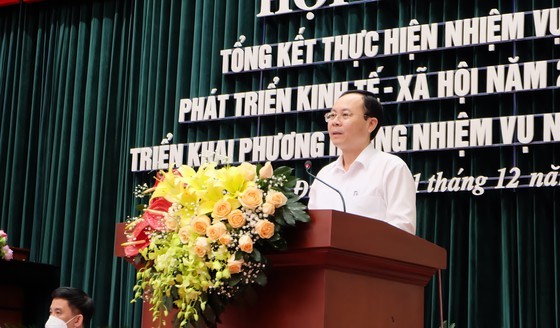 Thu Duc City Party Committee Secretary Nguyen Van Hieu (Photo: SGGP)
Another important task is that Thu Duc City must speed up the completion of the Thu Duc City master plan to 2040. According to Mr. Binh, this is an important basis for Thu Duc City to call for investment and implement the socio-economic development strategy.
Furthermore, the master plan will help synchronous implementation of many solutions to solve the problems of poverty, population, housing, transport infrastructure, and environment. Last but not least, the city must come up with solutions to tackle long-standing problems in Thu Thiem New Urban Area and Ho Chi Minh City Hi-Tech Park.
Vice Chairman Binh also directed Thu Duc City to be determined to tackle spontaneous markets and business stalls that have been causing an unsanitary environment and spreading disease.
Thu Duc City Secretary Nguyen Van Hieu directed the Thu Duc City People's Committee to focus on administrative reform to become the leading unit of Ho Chi Minh City in the field.
First of all, the city administration must coordinate with units to launch the 5G network and mobilize enterprise resources to accelerate investment in building a smart, creative and highly interactive city in the East of Ho Chi Minh City.
He requested to soon set up a business association, creating an environment for the Party committees and local authorities to regularly contact the business community in the city and businesspersons can talk to each other.