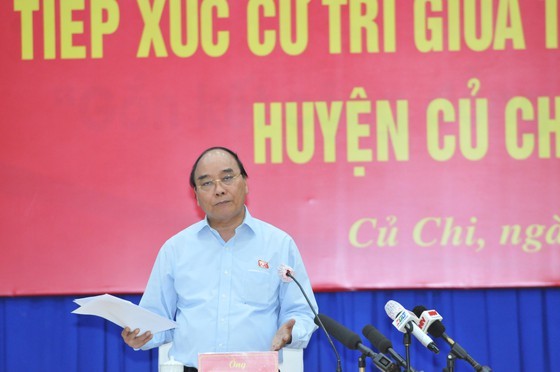 However, the President also said that HCMC still has many obstacles and difficulties. There are many shortcomings in economic and social infrastructure. The President pointed out that waterways, roads, airways, and connecting highways are issues that need to be solved for the development of HCMC and the two districts. 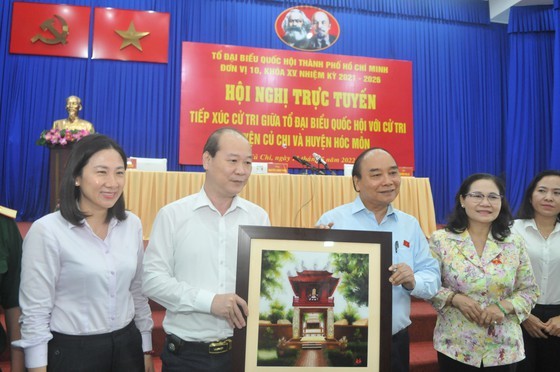 President Nguyen Xuan Phuc gives a gift to Cu Chi District. (Photo: SGGP)
President Nguyen Xuan Phuc asked HCMC to effectively implement economic restructuring programs, aiming for an innovative economic model, and drastically improving the business investment environment. At the same time, it is necessary to improve the quality of human resources, mobilize resources in society, pay more attention to public-private cooperation, and remove bottlenecks in each project. In addition, it is necessary to continue to review and perfect the urban planning of HCMC in accordance with the goals of modern urban development.

The President also reminded HCMC and two districts to thoroughly settle the complaints and petitions of voters in cases that raise public concern and pay attention to the prevention of violence against children, women, and the elderly.

Regarding the voters' petitions, the President sympathized with many of them, especially pending projects. "There are projects that have not been completed for 17-18 years, so it is understandable why people complain," said the President.

The two districts of Cu Chi and Hoc Mon have a large area, with a size of over 1 million people, but their development has not been commensurate. Therefore, authorities are playing their part to stimulate the two districts to develop stronger, especially in terms of infrastructure.

President Nguyen Xuan Phuc emphasized that in development, people must be the center instead of putting people in a situation of no jobs or impoverishment. And he asked the city to ensure social welfare and housing for workers and people.

Many roads to be expanded soon

Voters suggested that the President and the National Assembly deputies pay attention to promoting the expansion of some important traffic routes, such as Provincial Road No.15, Provincial Road No.8, and Do Van Day Street. These roads have degraded, while traffic is heavy, so there is a high risk of traffic insecurity.

Voter Tran Van Hong, a resident in An Nhon Tay Commune in Cu Chi District, said that Bau Dung Industrial Park, with an area of 175ha, was planned in 2006, but until now, it has not been implemented, making the life of local people miserable. If the project is implemented, it should be completed soon. Otherwise, it should be deleted to ensure the interests of local people. Meanwhile, voter Le Van Khia, a resident in Phu My Hung Commune in Cu Chi District, expressed his wish that the project of the eco-tourism area along the Saigon River would call for investment to be carried out soon. 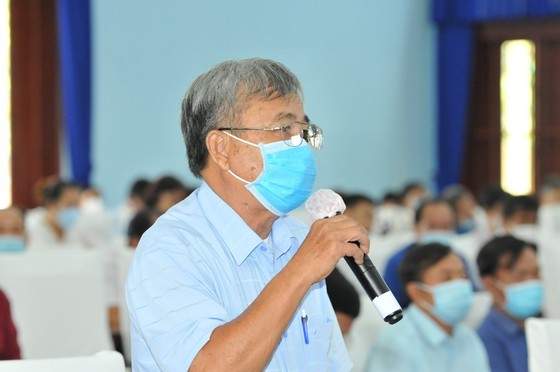 A voter in Cu Chi District speaks at the meeting. (Photo: SGGP)
Voters were also interested in many common issues and suggested that the National Assembly continue to have specific mechanisms and policies to create favorable conditions for HCMC's development.

Voter Vu Van Hieu, a resident in Tan Phu Trung Commune in Cu Chi District, said that the new general education program that made History an optional subject was not appropriate. History must be a compulsory subject. The education sector must take the responsibility to arouse the love of learning History, favor History teachers, and organize competitions on History to inspire students.

Meanwhile, voter Nguyen Van Dung in Thoi Tam Thon Commune in Hoc Mon District complained that the HCMC - Trung Luong Expressway often had traffic accidents. Many sections of the expressway are even like traps for vehicles. Voters proposed to review the shortcomings of this traffic route and arrange an emergency medical station near the expressway to promptly give first aid to victims of road accidents.

Chairman of the People's Committee of HCMC Phan Van Mai informed voters about the Covid-19 control situation in HCMC. Accordingly, thanks to good Covid-19 control, in the first months of the year, HCMC has gradually regained the image of a dynamic socio-economic center, the locomotive of the country. The People’s Council of HCMC has issued many important resolutions, such as the Resolution related to the Ring Road No.3 project; the Resolution to improve grassroots medical capacity; support policies for the elderly, lonely old people, and orphans; special policies for volunteers in Covid-19 prevention. 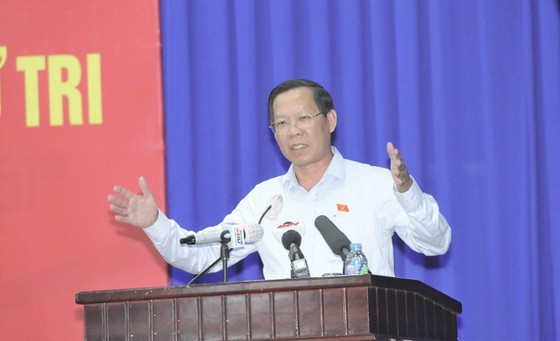 Mr. Phan Van Mai, Chairman of the People's Committee of HCMC, speaks at the meeting with voters in Cu Chi and Hoc Mon districts. (Photo: SGGP)
After the investment promotion conference in Hoc Mon and Cu Chi districts, many investors have shown interest, and many projects have been licensed. It is expected that the People's Committee of HCMC will work with two districts to implement specific work in June 2022.

However, Mr. Phan Van Mai, Chairman of the People's Committee of HCMC, also noted that from the conference to the construction of the project is a long process, and it is not that every project can be realized. Therefore, there must be caution, good management planning, and propaganda to join hands in implementing good planning. Hot and virtual transactions should be prevented so as not to hinder development. Besides, to attract investment, it is also necessary to remove bottlenecks in planning, land, and investment procedures.

Regarding the socio-economic results in the first four months of the year, Mr. Phan Van Mai said that the economy of HCMC recovered quickly and synchronously and posted positive growth. Budget revenue in the first four months reached 43 percent of the estimate, at VND168 trillion. In the coming time, HCMC will focus on controlling the pandemic and effectively implementing the growth recovery program, at the same time removing obstacles, especially those that have a great impact on people's lives, affecting the cash flow into production and business activities.

For example, HCMC focuses on solving problems about the regulation of 20 percent of social housing in commercial projects. If this problem can be solved, thousands or even tens of thousands of apartment buyers will be granted certificates.

Mr. Phan Van Mai informed voters that the HCMC - Moc Bai Expressway project would be submitted to the Prime Minister in June 2022. Regarding the Safari project, the city has assigned the Department of Planning and Architecture to recalculate its functions to attract investment, which will be completed in the first six months of 2022. As for Bau Dung Industrial Park, HCMC has asked the Prime Minister to remove it from the planning. The People's Committee of HCMC will ask the authorities to soon review and report to voters.