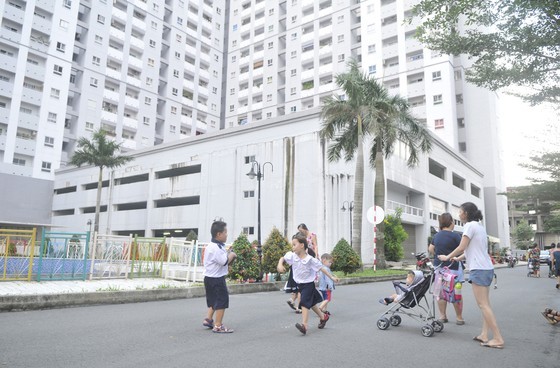 A social apartment block in Binh Chanh outlying district
In the upcoming time, the housing demand is expected to continue to rise in big cities and industrial zones. In densely populated cities Hanoi and Ho Chi Minh City, the urban housing area must increase to meet metropolitan dwellers’ housing needs.
For instance, the housing needs of dwellers in Ho Chi Minh City are very urgent. The southern metropolis currently has 10 million population not to mention millions of migrant workers and students from other provinces and cities. The southern largest city is grappling with a shortage of homes.
Regarding the housing development program for the 2021-2030 period, the city aims to develop another one million houses including 100,000 social apartments for workers to satisfy forecasted demand created by a growing population.
According to Mr. Tran Hoang Quan, Director of Ho Chi Minh City Department of Construction, this year, the city has issued a plan to build over 50,000 social apartments for workers aiming to help migrant workers who have long contributed to the economic development of the city settle down in the city.
In the current context, it is very necessary to set the target of housing development for low-income people in Ho Chi Minh City as mentioned above. When banks tightened credit to developers of commercial housing, land prices in suburban districts slowed down or decreased; hence, the development of social housing projects should be prioritized by the city government.
If the State has active support mechanisms and policies for social housing projects or subsidizing loan interest rates, investors will be willing to pour money into social housing projects. It is worth noting that when the economy is facing difficulties, the implementation of a series of projects on social housing and housing for workers has not only met the expectations of low-income people but also led to the development of the construction industry and iron, steel, cement industries contributing to the economic development of the city, creating upward momentum in the coming years.
About 519,000 people need social housing
The Department of Construction of Ho Chi Minh City has just sent a report to the Ministry of Construction on a project to build more than 1.8 million social housing apartments  for low-income people and workers working in industrial parks and export processing zones in the 2021-2030 period.
Accordingly, Ho Chi Minh City’s District 12 has many land areas for building social housing projects, Binh Tan District has three land areas for social housing projects and Go Vap District has two land lots. In addition, the city also has a 20 percent land fund for social housing projects in 25 plots of land with a total area of 57ha to build commercial housing projects. Thu Duc City has 20 projects, Binh Tan District has three projects, District 7 has one project and Binh Chanh District has one project. Of these, 14 projects in clean land are carrying out investment procedures for social housing construction.
In the 2021-2025 period, an estimate of about 519,000 people need houses and in the next 5 years, more than 524,000 people including workers find accomodation.