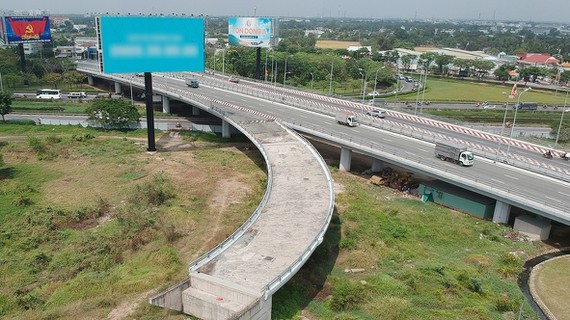 Unfinished connection from Vo Van Kiet Street to National Route 1A
One of the most frequently congested areas is the Nguyen Van Linh overpass - National Route 1A, the intersection linking HCMC and cross-region highways which receive insane traffic each day.

As a result, some narrow sections of these streets have become degraded faster, making the traffic jams and air pollution more severe.
IDICO, a prominent urban development company, in the past proposed a BOT project to get funds for upgrading the National Highway running through An Suong - An Lac, involving expanding the road to accommodate four car lanes and two mix-traffic lanes. The project was worth VND1,880 billion at the time (about US$81.5 million, but never came to fruition due to administrative complications.
Besides the aforementioned locations, many other sections along major highways cannot meet the increasing traffic volume such as sections on national routes 1A and 50, Dinh Duc Thien Street and others, which are also hotspots of traffic collision.
According to leaders of Binh Chanh District, the locality will focus on external traffic and upgrade main roads, parallel roads, and bypasses to relieve congestion.
From now to 2025, the district proposes to invest in upgrading and expanding 30 road projects and building 31 new ones with a total length of some 86km.
On a municipal level, HCMC Department of Transportation is constructing a project for the period of 2020 - 2030 to develop all 4 gateway areas of the city, as well as upgrading the roads connecting Nguyen Van Linh Street to Ho Chi Minh City - Trung Luong highway.
The city also determines to solve traffic problems before approving more apartment complex projects in these areas.