Chairman Phong added that it is needed to protect these men who are ready to sacrifice for the city people’s safety and property.

The ‘street knights’ yesterday followed the gang of robbers from Tan Binh District to district 3 where they stopped in front of the store and started to steal an SH scooter parked there. Being chased by the street guardians, the gang of robbers took out weapons to aggressively fight back. Consequently, two men died and three men were seriously wounded.
Hospital deputy director Dr. Bui Minh Trang said that the hospital admitted three men who were rushed to the hospital in critical condition. Forty-two year old Nguyen Van Thoi and 29 year old Nguyen Hoang Nam had wound in their heart and their body turned blue. Despite doctors’ efforts to save him, they succumbed to the wound.
Fifty year old man Tran Van Hoang was also taken to the hospital with multiple injuries with his gut hanging out. Surgeons of inter- departments in the hospital worked together to save him.
Three men live in Tan Binh District and are ‘street guardian’ group which voluntarily patrol their neighborhoods to detect and catch criminals who try to take away people’s asset.
Additionally, two 22-year-old students joining in the fight against the thieves were fatally injured by slash.
Grateful for their chivalrous deed of the street guardians, Chairman Phong requested police force to seek for a gang of four robbers and hospitals to take care of wounded knights. 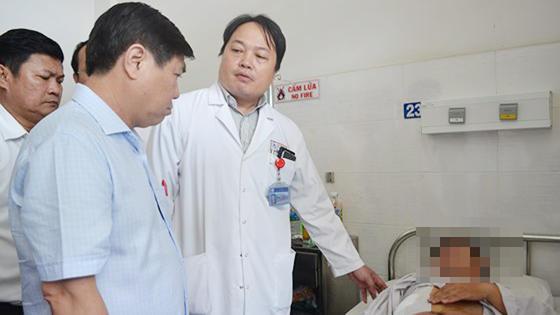