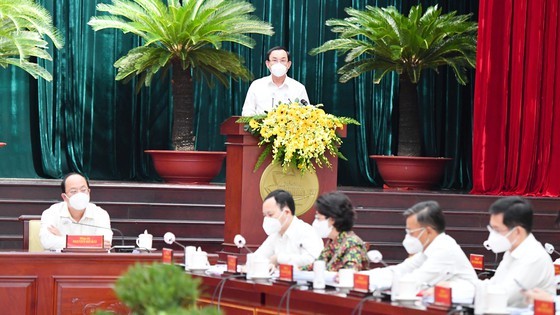 Mr. Nen speaks at the conference (Photo: SGGP)
Yesterday, Mr. Nen made the statement at the tenth session of the 11th-term HCMC Party Executive Committee which is scheduled to take place on December 1 and 2 in face-to-face and online format.
The conference participants focused on giving opinions on the following issues including report on Party building, government building and mass mobilization work in 2021, key tasks and solutions in 2022, the socio-economic situation of Ho Chi Minh City in 2021, the city’s socio-economic recovery and development program from 2022 to 2025, plan for socio-economic development of the southern largest city in the period of 2021-2030, with a vision to 2050.
Speaking at the opening of the conference, Secretary of Ho Chi Minh City Party Committee Nguyen Van Nen emphasized two groups of major tasks comprising socio-economic and Covid-19 epidemic prevention and control and the Party building, government building, mass mobilization work. 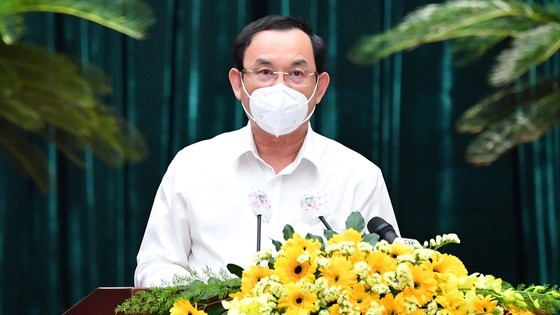 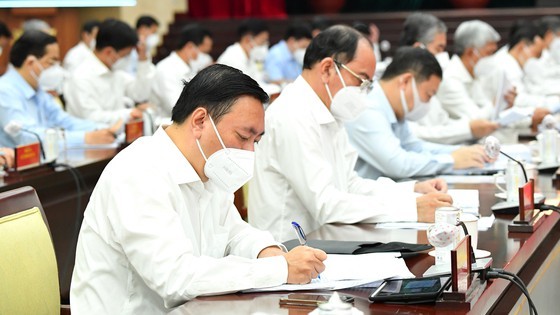 At the conference (Photo: SGGP)
Party Chief Nen assessed that, by the end of September 2021, HCMC had gradually controlled the Covid-19 epidemic to enter a new normal state, but because the city had suffered heavy losses, many people had lost their lives during the coronavirus pandemic which has left a massive impact on all aspects of society.
In the first quarter of 2021, the city's socio-economic situation developed quite evenly and stably with the increase in the gross regional domestic product (GRDP) of 4.58 percent. In the first six months of the year, it started to slow down and by the end of 2021, the socio-economic situation had suffered a serious decline.
It can be said that for the first time in the history of Ho Chi Minh City since the renovation period, HCMC grew -6.78 percent, far behind the yearly growth target of 6 percent set by the Government, said Mr. Nen.
According to the estimate, 13 out of 29 targets can be completed this year whereas 14 targets can’t be fulfilled, and two remaining targets must wait until the end of the year. However, there are some good points. For instance, export turnover (excluding crude oil) increased by 2.8 percent while import turnover increased 24.9 percent over the same period. Notably, the total state budget revenue by the end of the year can achieve the target.
Accordingly, the Secretary of the HCMC Party Committee asked the delegates to evaluate the socio-economic development situation in 2021 as well as provide analysis, comments and forecasts for 2022 and the following years. Especially, participants should give opinions over key tasks in the next year.
He also mentioned that medical staff at grass root medical facilities have been showing signs of fatigue after the four wave of Covid-19 last time; worse, many health care workers decided to quit their jobs and some have worked under high pressure.
Therefore, he proposed conference participants discuss urgent measures to strengthen grassroots health care, community health care, and mobile health care and how to formulate support policies and solutions for doctors and nurses in medical institutions in districts.
Regarding the socio-economic development plan for the 2021-2025 period, Mr. Nguyen Van Nen assessed that this plan is of special significance, because it determines the successful implementation of the Resolution of the 11th National Congress of the city Party Committee.
“Ho Chi Minh City has agreed not to change or adjust the basic goals and targets set out. But in the context of the new normal, there must be new solutions, new mechanisms and appropriate plans, what problems need to be adjusted?", he said.
The Secretary suggested focusing on discussing important issues related to improving the quality of urban admistration in association with the implementation of the project of building a smart city, applying science - technology, and building a smart city in addition to promotion of digital transformation, digital economy and digital society or projects on infrastructure development, urban embellishment or projects to develop Ho Chi Minh City into a regional and international financial center...
He also mentioned the task of planning socio-economic development of Ho Chi Minh City in the period of 2021-2030, with a vision to 2050 emphasizing that this is the basis for building annual, five-year and long-term development plans ensuring a scientific and practical basis for socio-economic development and the building Ho Chi Minh City into an industrial and cultural city, an economic locomotive...
When it comes to the tasks of 2022, Secretary Nen asked the conference participants to discuss and give their opinions first on the annual theme of the Party building work.