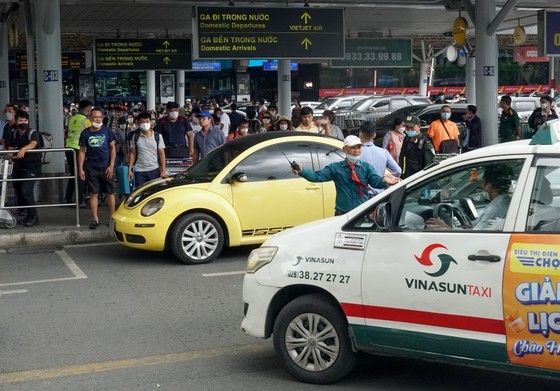 Waiting for a taxi at TSN Airport on August 8 (Photo: SGGP)

The Southern Airports Authority reported that the planned capacity of TSN International Airport is at 30 million passengers a year, but the airport in reality has served nearly double that figure. Particularly during this summer, TSN Airport each day accommodates 730 flights with 120,000 passengers on average.

This high quantity has resulted in trouble of vehicle parking or pick-up and drop-off. Compared to the planned space for 6,000 motorcycles and 700 taxis, now the airport is welcoming 6,600 motorcycles and 4,500 automobiles in and out per day.

Moreover, Truong Son Street is the only route to enter or exit the airport, not to mention it being the shortcut from Binh Thanh District, Go Vap District, and Thu Duc City to the downtown. Deputy Director of the HCMC Transport Department Phan Cong Bang added that surrounding roads were not built in accordance with planning, also leading to more pressure on Truong Son Street.

The third problem lies in the limit of 4 pick-up and drop-off lanes for passengers in the domestic terminal, which is not at all sufficient for buses, taxis, and tech-based taxis to serve a large number of passengers. Right now, only bus route No.152 from Trung Son residential area to TSN Airport is running, but the pickup location and timetable are not suitable yet.

To gradually tackle the traffic issues in this airport, 5 years ago, functional units of HCMC and the Transport Ministry, the National Defense Ministry agreed to develop a master planning piece, consisting of many consistent solutions. Sadly, except for the overpass on Truong Son Street, the overpass in Gia Dinh Park area and minor traffic regulation facilities, other major projects are still in theory. More than 10 street upgrade projects are still waiting to complete administrative procedures. 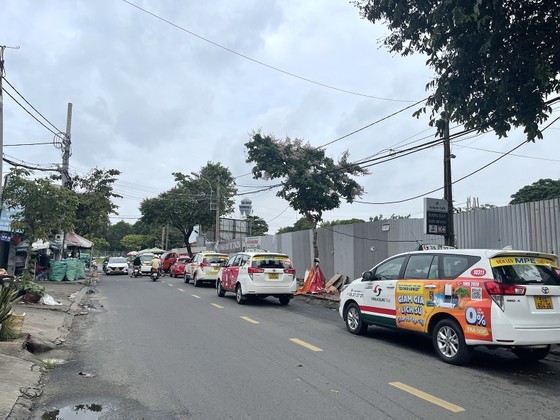 Taxis are parking along Bach Dang Street in Tan Binh District to wait for their turn to enter TSN Airport to pick up customers.

The construction of T3 station with a capacity of serving 20 million passengers a year is expected to reduce the crowds in T1 and T2 stations. It is now in the land clearance step.

A road construction project to connect Tran Quoc Hoan St to Cong Hoa St is being carried out by the HCMC Management Board for Traffic Works Construction and Investment simultaneously with the T3 project to ensure smooth traffic flow in the future.

Vice Chairman of Tan Binh District People’s Committee Truong Tan Son informed that the city is waiting for the approval from the Prime Minister for the land clearance compensation of the defense-purposed land. Tan Binh District is now urgently completing the plan for land assessment and compensation, resettlement support for the other surface areas of the above project. A notice of land retrieval will be issued accordingly, before the official groundbreaking ceremony in November 2022 to complete in September 2024.

The project to expand Hoang Hoa Tham Street is also in the land clearance step, and 121 out of 152 households have agreed with compensation. Tan Binh District People’s Committee is measuring the surface area of the related defense land lot to include in the project’s compensation plan. It is expected that the project will kick off in October 2022, and finish after 6 months.

The project to renovate a part of Cong Hoa Street passing Tan Binh District has a suitable contractor selected, and a land compensation, resettlement support decision issued to be applied to 16 households. This task is predicted to be completed in September 2022, and the construction will start the following month to finish 3 months later.

Other projects to fight against congestion around TSN International Airport have been approved as public-investment ones, and are on their way of land compensation, design completion based on the foundation design, or retrieval of defense-purposed land lots.

These traffic facilities projects are supposed to form a complete traffic network surrounding TSN International Airport for the sake of easy traveling.