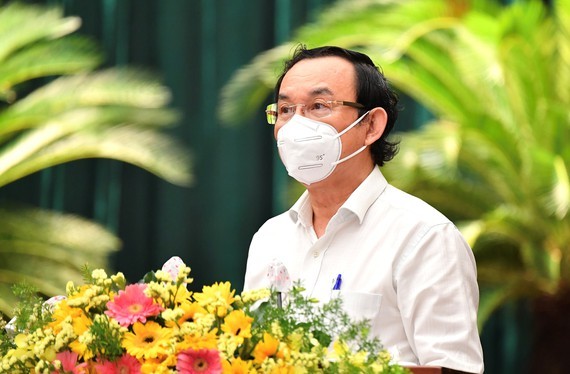 Secretary of the Ho Chi Minh City Party Committee Nguyen Van Nen speaks at the meeting (Photo: SGGP)
Speaking at the event, the city Party Chief informed that the Municipal Steering Committee for Covid-19 Pandemic Prevention and Control had checked and given assessments on the pandemic situation in the whole city under control at the current time.

On the other hand, Mr. Nen noticed that the city needed to continue to strive more to implement Resolution No. 128/NQ-CP dated October 11, 2021 of the Government, promulgating the Interim Regulation on “safe and flexible adaptation and effective control of Covid-19.

Secretary Nen mentioned the recent inspection of the HCMC National Assembly’s delegation on Covid-19 prevention and control across the city, notably the high appreciation and recognition from State President Nguyen Xuan Phuc on efforts and achievements of the city Party Committee, local authorities and residents. Through the inspection, President Nguyen Xuan Phuc directed key contents for HCMC in the economic recovery and development under the new normalcy. 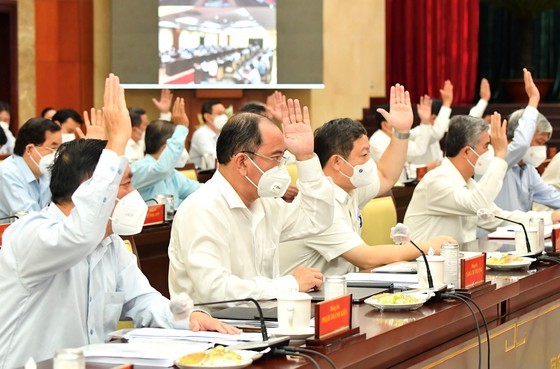 The delegates at the meeting
In the upcoming time, HCMC will kick off a conference to summarize Covid-19 pandemic prevention and control works, the fourth pandemic wave outbreak.
Therefore, the meeting will focus on discussing four major contents under the set working program of 2021, including economy, culture, society, national defense and security, the state budget revenue and expenditure in the first nine months of the year and tasks, solutions in the last three months of 2021, the medium-term investment plan for 2021-2025, summarization reports of ten-year implementation of Resolution No.09 on building and promoting the role of Vietnam's entrepreneurs in the period of accelerating industrialization, modernization and international integration along with some other reports as regulated. 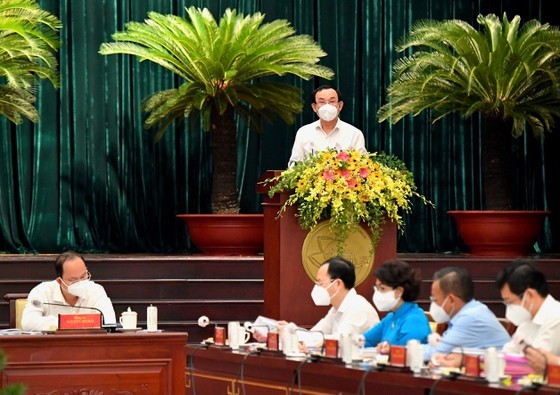 A view of the conference
Among them, the city Party Chief hinted at key contents, including economy and society.  Mr. Nen shared that the Covid-19 pandemic had hugely affected the city economy and society. Many economic indexes have dropped sharply, especially the GRGP in the first nine months of the year reduced by 4.98 percent.

Besides, the State budget revenue in the first nine months is estimated to reach VND271,630 billion (nearly US$12 billion), accounting for over 74 percent of estimates, of which revenue from local and import-export activities gained 71 percent and 80 percent, respectively compared with the same period last year.

In the fourth wave of the Covid-19 pandemic outbreak, the city Party Committee has strongly promoted solidarity through the whole political system and people involved in the pandemic fight and social welfares. 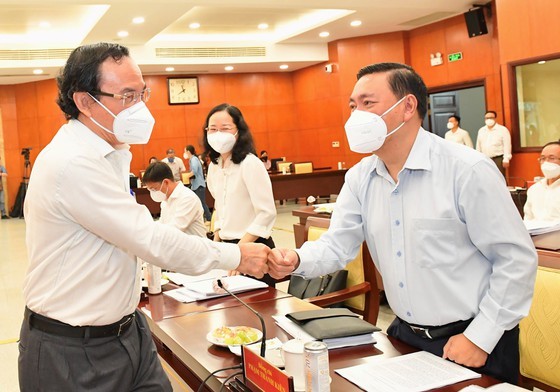