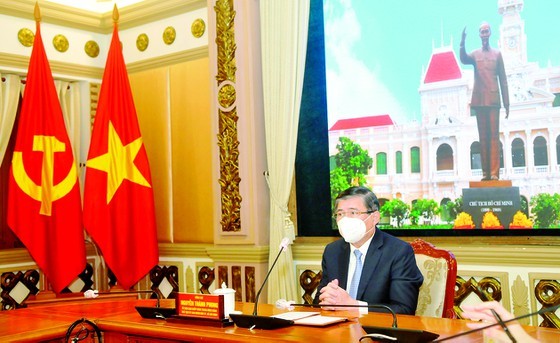 Yesterday, the Italian Consul General bid farewell to Chairman Phong via an online meeting on the occasion of ending his working- term in the city.
At the meeting, Chairman Nguyen Thanh Phong pleasured at the development of strategic partnership relations between Vietnam and Italy during the recent years and he highly appreciated the role of the Italian Consul General in promoting the relationship between two countries, especially between Ho Chi Minh City and Italy in fields of culture and heritage preservation.

The city leader also hoped that Mr. Dante Brandi’s successor would concern with promoting the cooperation with HCMC in two fields of economy, trade, science and technology and continuously implement the initiatives and cooperation projects between the European country with HCMC.

Mr. Phong wished that Mr. Dante Brandi would be more and more successful in his new position.

On his part, Mr. Dante Brandi expressed his thankfulness to the Ho Chi Minh City leaders for creating favorable conditions to help him fulfill the tasks during his tenure.