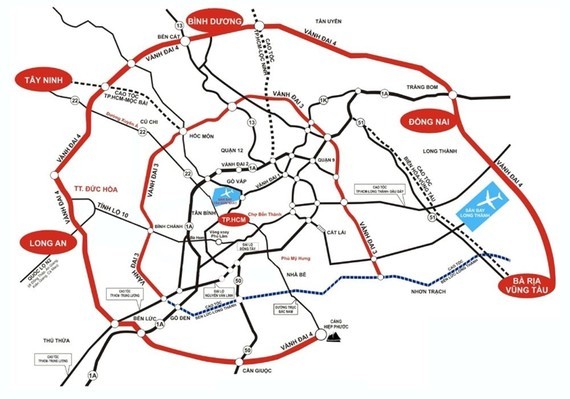 Map of  three Ring Roads
The Ring Road No.4 project has a length of about 200 kilometers, connecting HCMC with neighboring provinces of Binh Duong, Dong Nai, Long An, and Vung Tau. It runs from Bien Hoa-Vung Tau expressway in Phu My Town in Ba Ria-Vung Tau Province to Hiep Phuoc Port in HCMC.

The section passing through HCMC is 17 kilometers; Ba Ria-Vung Tau Province is 18 kilometers, Dong Nai Province is 45 kilometers, Binh Duong is 49 kilometers and Long An is 71 kilometers.
The Prime Minister previously asked HCMC and the provinces of Binh Duong, Dong Nai, Long An and Ba Ria-Vung Tau to implement the works of the sections running through every locality.
The Prime Minister also delegated the HCMC Transport Department to take responsibility for coordinating with the functional departments of provinces to build a pre-feasibility study report on the construction of Ring Road No.4.