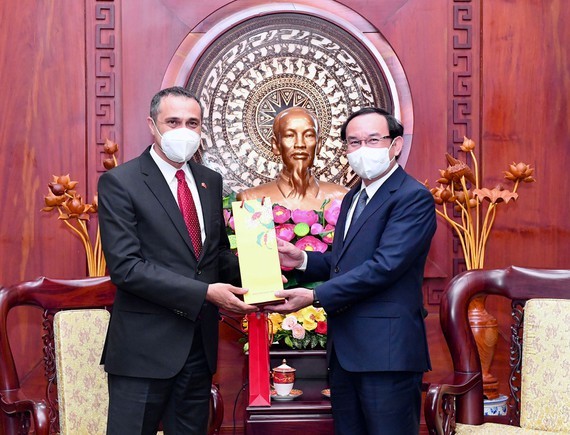 Secretary of the Party Committee of HCMC Nguyen Van Nen (R) receives Mr. Behzad Babakhani, consul general of Canada in Ho Chi Minh City on May 12.
On behalf of the authorities and people of HCMC, the City Party Chief expressed his sincere thanks for the sharing and support taken by the Canadian Government in the fight against the coronavirus pandemic in HCMC.

Mr. Nen highly appreciated the cooperation relations of HCMC and the US that have been deepened much more across a wide range of sectors, especially from the Canada-Vietnam Comprehensive Partnership Agreement that was signed in 2017.
In 2021, the bilateral trade reached more than US$6 billion, an increase of 18.5 percent compared to 2012 despite the Covid-19 pandemic. Canada currently ranks 22nd among 116 countries and territories investing in Vietnam with 112 projects worth US$130 million.
He hoped that Mr. Behzad Babakhani would boost the implementation of cooperation programs to elevate relations between the HCMC and Toronto after the establishment of diplomatic relations between the two sides in 2006.
For his part, Mr. Behzad Babakhani, consul general of Canada in Ho Chi Minh City highly appreciated relations between Vietnam and Canada in general, Canadian localities and HCMC particularly, especially the establishment of the Canadian Consulate General in HCMC in 1995.
He affirmed the important roles of HCMC and its neighboring areas with the volume of imported products to Canada accounting for 90 percent; and 250,000 Vietnamese Canadian people who have returned to homeland to contribute to the development of the relationship of the two countries.
More than 10,000 Canadian people are living and working in Vietnam,primarily in HCMC. The city is also home to a large number of Canada’s leading enterprises, he added.