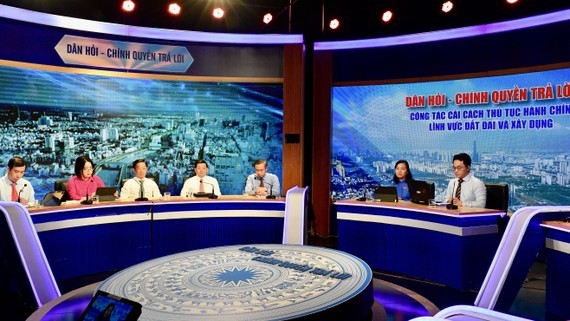 The Deputy Director made the state at a program called People Ask - Government Answers with the topic ‘Reform of administrative procedures in the field of administrative law in the field of administrative law" land and construction sector’ organized by the People's Council in Ho Chi Minh City in collaboration with the Television Station and the Department of Information and Communications with the participation of Nguyen Thi Le, Chairwoman of the municipal People's Council.
During the program, voters posed many problems for delegates and guests. Specifically, voter Tran Viet Trung in Thu Duc City said that people who go to administrative procedures for land are looking forward to knowing how their dossiers have been handled. In fact, some state agencies make an appointment to return the land records but they didn’t write a detailed date.
Meanwhile, voter Nguyen Dinh Tue from the HCMC Union of Business Association (HUBA) commented on the slow completion of construction procedures.
In addition, people have a great need for the construction of auxiliary works on agricultural land to develop hi-tech agriculture, but it has not been implemented yet.
Director of the City Department of Natural Resources and Environment Nguyen Toan Thang said that the Natural Resources and Environment sector worked with the tax sector to handle land dossiers for people’s travel. In the first six months of the year, Ho Chi Minh City has granted 16,000 land use right certificates, out of a total of 20,000 documents according to the 2022 plan.
Regarding the construction of auxiliary works on agricultural land, Deputy Director of the City Department of Construction Le Tran Kien said that the department has initially piloted in three districts; from which it has advised the People's Committee to continue piloting in five other districts.
In addition, the City Department of Construction, in collaboration with the City Department of Natural Resources and Environment, submitted a report to the People's Committee of Ho Chi Minh City for approval of a drawing template for general use in two administrative procedures, namely granting construction permits and granting a change of house ownership certificates. If the two departments’ proposal is approved, people only need to use one licensed drawing for two administrative procedures.
Ms. Trung Trinh said that Ho Chi Minh City will put into use a unified information system to handle administrative procedures. From this system, people, businesses, and civil servants will have complete and unified information when implementing and handling administrative procedures.
Also in this program, voter Dinh Cong Khuong in District 11 complained that he has applied to change the land use purpose five times but his application was rejected because District 7 had not yet approved the land use planning.
Based on the resident’s complaint, Vice Chairman of District 7 People's Committee Le Van Thanh proposed that the municipal People's Committee should have two waves of approvals of land use plans each year, in which priority should be given to cases of change of land use purpose of individuals households according to the residential land quota. This aimed to solve the needs of city dwellers, preventing illegal land trading and construction.