That is one of resolutions issued by the 9th People Council during its 20th session taking place from July 9-11.

In the phase of 2021-2025, HCMC will focus on developing bus network and implementing some measures to create a basis for private vehicle control and traffic reorganization to two and three wheeled motor vehicles in the downtown areas.

From 2026-2030, the city will synchronously carry out support measures to control private vehicles and head toward traffic re-organization for two and three wheeled motor vehicles in some areas.

HCMC has set a target of developing public passenger transport to meet 15 percent of residents’ travel demand by 2025 and 25 percent by 2030. 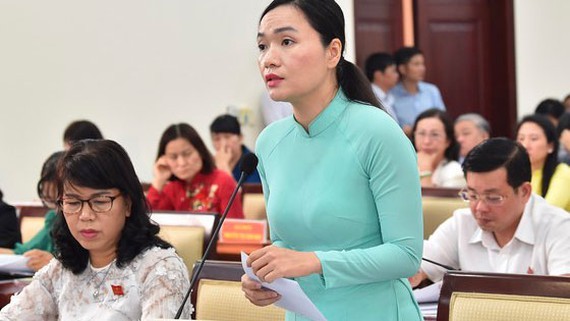 The 20th session of the 9th People’s Council took place on July 9-17 (Photo: SGGP)
The city People Council also issued a resolution to reduce 2,299 part time cadres in communes, wards and towns. The city will spend VND120 billion ($5.19 million) on allowance payment to these cadres.

Deputies at the session also voted on the resolution to supplement names for streets in the city and rename Dinh Tien Hoang street in the stretch from Bong Bridge to Phan Dang Luu street, Binh Thanh District, to Le Van Duyet. This area is home to Le Van Duyet Temple which has been ranked national relic site. Surrounding the temple are streets named after contemporaries of marshal Le Van Duyet such as Trinh Hoai Duc and Phan Van Tri.

The renamed stretch of the street locates in Wards 1 and 3 of Binh Thanh District and it does not cause house number change.

The school milk program was officially launched on November 1, 2019 to improve the height of kindergarten and first-grade students in the phase from 2018-2020. Still contractor selection was prolonged, then students were out of school due to the Covid-19 pandemic so in fact the program has provided milk for students for four months.

In order to have more time to estimate the project’s implementation, the city will continue the program until December this year.

Under the first phase, the city will continue piloting the program in 10 Districts 9, 12, Thu Duc, Tan Phu, Binh Tan, Cu Chi, Hoc Mon, Nha Be, Can Gio and Binh Chanh in September and October to provide milk for kindergarten and first-grade students including those living in public and non-public social protection establishment.

In November and December of the 2020-2021 academic year, the city will implement the program all 24 districts.