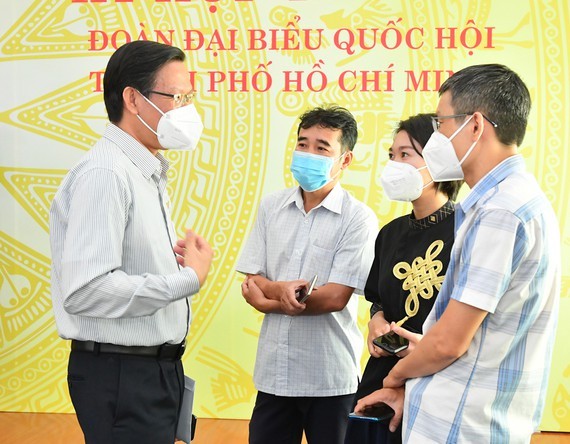 Mr. Mai (first, L) talks with  reporters on the sidelines of the second session of the 15th National Assembly
Mr. Mai informed that the city has focused on building safety assessment criteria in activities in all fields. In addition to the assessment of the epidemic level, the city will develop an epidemic monitoring and warning mechanism.
The city is also studying the pilot reopening of on-site catering services and other services. The Chairman said Ho Chi Minh City has a policy of reopening when the epidemic situation improves; the government must ensure safety criteria.
He added that as scheduled, Ho Chi Minh City will announce the level of the epidemic on October 25. Currently, some wards and communes have been reported at the first level while others at the second level and third level. First-grade areas are allowed to resume more activities than these areas with second and third grade.
Previously, on the evening of October 15, in the program “People asked - The city answered”, Associate Professor Tang Chi Thuong, Director of Ho Chi Minh City Department of Health, said that as of October 15, Ho Chi Minh City temporarily ranks orange zone. He hoped that in a few next days, the southern largest city will rank yellow zone.
He explained if the city reports over 150 new cases per 100,000 residents a week, it will be ranked at a very high-risk area or “red zone" while it is at third grade or "orange zone" if it has 50 to less than 150 new infection cases. It becomes a "yellow zone" with 20 to less than 50 cases and a "blue new normal" area with less than 20 new cases.