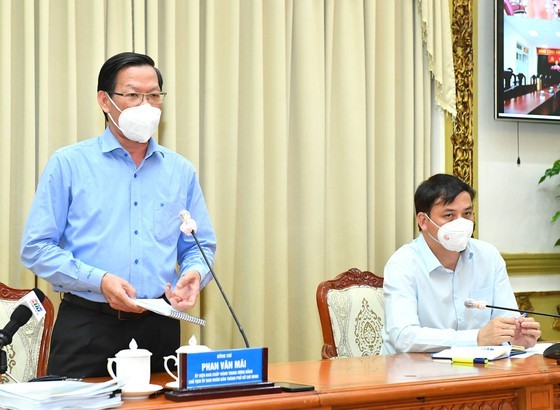 Chairman Mai at the meeting  (Photo: SGGP)
The chairman made the statement at an online meeting between the municipal People’s Committee and districts and Thu Duc City about the socio-economic situation in the first nine months and key tasks for the last three months of the year.
He requested to focus on assisting household businesses and enterprises for recovery as soon as possible. Resuming industrial, commercial, and service activities will create more employment generating earnings for dwellers; hence, it will contribute more to the city state budget.
Speaking at the meeting, Vice Chairman of the city People’s Committee Le Hoa Binh stressed that the infection cases of Covid-19 and deaths dropped dramatically. The southern metropolis authorities have been considering deleting checkpoints in bordering crossings to facilitate transportation of goods and supply of labor between the city and neighboring provinces.
According to him, HCMC has gained certain achievements despite the impacts of Covid-19. For instance, the city budget collection reached 75 percent of the estimation.
The city’s posted gross regional domestic product (GRDP) growth rate was estimated to increase by 5.6 percent in the first half of this year compared to the same period last year; however, it dropped drastically by 24.39 percent in the third quarter against the same period.
Worse, he said that the pandemic has made a great impact on the city’s socio-economic activities and dwellers’ psychology and living conditions.
Accordingly, Mr. Mai ordered leaders of all departments and sectors as well as chairpersons of people’s committees in districts and Thu Duc City to do the utmost to complete their tasks in the remaining months of the year. He emphasized that city administrations will keep company with businesses to remove hiccups along the way for the city’s economic recovery.
He once again stressed that many existing problems need to be solved soon; therefore, district administrations must re-check individual responsibilities and each person must complete their tasks immediately.
Regarding the prevention and control of coronavirus pandemic in the city, Chairman Mai directed to perfect health care system especially the disease monitoring system and safety criteria. Above all, he said that the medical sector must re-structure and more invest in health care facilities in districts.
Last but not least, he instructed to invest in public constructions for ensuring disbursement of 95 percent this year. More importantly, local administrations in districts ought to help get rid of bottlenecks in projects of private companies.
Plus, he asked to accelerate the current sluggish equitation process of State-owned enterprises (SOEs) as well as mobilize social contributions for the city’s economic recovery. 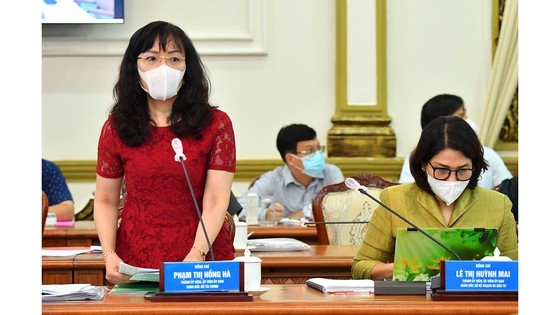 Director of Ho Chi Minh City Department of Finance Pham Thi Hong Ha speaks at the meeting (Photo: SGGP)
Finally, Mr. Mai said that departments and sectors must connect their database and platform for the city administration with the aim to help push up the city. The image of the city has been damaged; hence, Mr. Mai reminded all departments and sectors to rebuild the good image of the city.
At the meeting, Director of Ho Chi Minh City Department of Finance Pham Thi Hong Ha said that the state budget revenue in the first 9 months of 2021 reached 75 percent. Due to the impact of the Covid-19 epidemic, budget revenue in August and September dropped sharply.
She revealed that according to a report from the Department of Natural Resources and Environment, the city has 13 projects that can be allocated land to collect land use fees in 2021. In addition, it is estimated that VND21,000 billion (US$925,200,321 ) can be obtained from the auction of the four land plots.
For public houses and public land managed by responsible agencies in Ho Chi Minh City, the Director of the Ho Chi Minh City Department of Finance said that the city now has more than 400 land plots. Land use rights of more than 70 land plots can be put up for auction.
Therefore, she suggested that local administrations check and speed up the implementation progress. If local administrations make a change in their plans for using these plots, they need to report it soon to the Department of Finance.