On behalf of the municipal Party Committee, Secretary of HCMC Party Committee Nguyen Thien Nhan honored the locals who gave assistance to the army officials and cadres of HCMC in the war time.

In response to the Vietnamese beautiful tradition “When drinking water, think of its source”, the city’s government often calls for donations to help people in need in neighboring provinces, he added.
In addition, the delegation also cooperated with the Vietnam General Confederation of Labor to offer gifts to 50 disadvantaged workers in the province.
At the reception for the HCMC’s leaders and officials, Secretary of the Party Committee of Tra Vinh province Tran Tri Dung expressed thanks to the city’s authorities for their support to his province in various fields, especially reducing poverty and completing 23 goals.
Mr. Nguyen Thien Nhan highlighted Tra Vinh province’s achievements for the past several years, especially the development speed by more than 11 percent, the expansion on economic cooperation, improvement of quality of life for local people.
On this occasion, the HCMC delegation offered VND1 billion, including VND500 million from Saigontourist Holding Company to Tra Vinh province’s authorities to support poor people on Tet festival.
City’s leaders also attended the inauguration of a hospital under Tra Vinh University and sent New Year wishes and presented 15 computers to teacher and students of Nguyen Thien Thanh high school for gifted students. 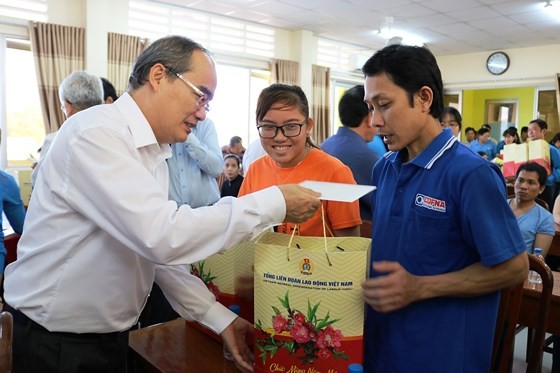 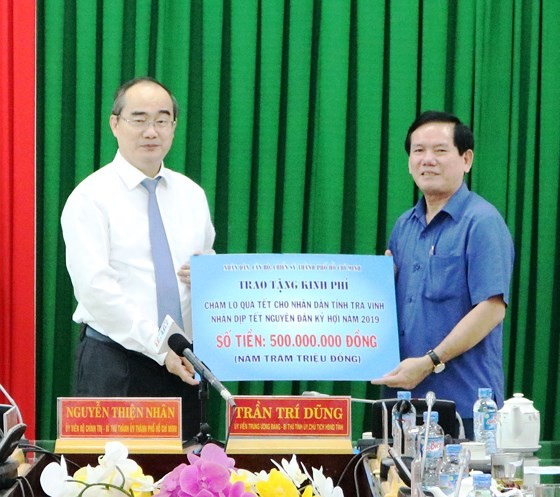