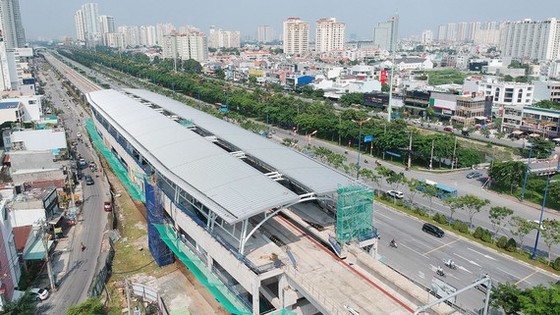 The metro line in middle of construction
The additional capital for the project is VND180 billion (US$7,923,435).
In addition, the Ministry should provide sufficient capital for the project of improving the city's water environment. The second phase of the Tau Hu - Ben Nghe - Doi - Te canal basin project in 2022 requires VND176 billion while the capital demand in the second phase of the project Environmental Sanitation in Ho Chi Minh City, the project Technical Support for Green Traffic Development of Ho Chi Minh City (SECO) and the project of Investment and construction of urban railway line No. 1 are VND200 billion, VND 50 billion and VND 1,444 billion respectively.
In addition, the southern metropolis authorities asked for a capital supplement for the city in 2022 and the city’s key projects in the medium term 2021-2025.
Specifically, the Ho Chi Minh City - Moc Bai expressway construction project has a total estimated investment of VND15,900 billion including VND5,901 billion from the central budget to support the city’s compensation and ground clearance.
The project of Dredging, environmental improvement, and infrastructure construction of Xuyen Tam canal (from Nhieu Loc - Thi Nghe canal to Vam Thuat river) with a total estimated investment of VND9, 353 billion.
Of the total amount, about VND9,353 billion is taken from the central budget capital. For the Hy Vong canal rehabilitation project with a total estimated investment of VND1,980 billion, VND1,980 billion is taken from the central budget