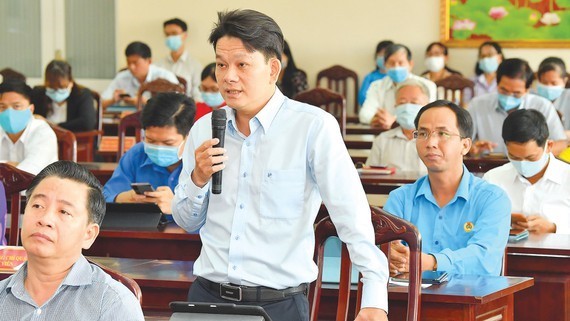 A recent paperless meeting in District 7, HCMC (Photo: SGGP)
One of the localities to take the initiative is District 7, whose staff developed an internal mobile app for officials to read briefings before each meeting. To avoid using hard copies during meetings, everyone can view the bullet points on their own mobile device and the common projector.

Thanks to the approach, the district managed to set aside almost VND45 million (about US$1.95 million) for their Congress of the Party Committee in the 2020-2025 term which is also going to be part of the e-cabinet initiative, said District 7’s Deputy Chief of Office.

Additionally, up to 50 percent of meetings at the HCMC Academy of Cadres are also conducted without paper documents, with the agenda and materials sent through emails before each meeting. Other conference related materials are posted to an internal website available to all board members, which according to internal sources has improved discourse quality and shortened the meeting time significantly.

On the other hand, many departments still rely on hard copies during meetings despite having electronic devices available, a sign of inefficiency in implementing the government’s e-cabinet system, as observed by Member of the Party Central Committee and Standing Deputy Secretary of the HCMC Party Committee Mr. Tran Luu Quang. 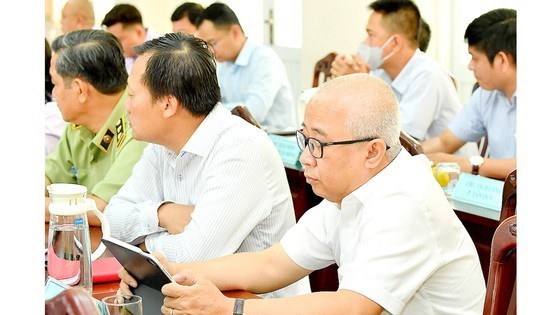 Tablets being used in a board meeting in District 7 (Photo: SGGP)
In response, spokespeople of various districts pointed towards the lack of budget to equip all meeting rooms with functioning tablets, as well as board members being unfamiliar with the system overall.
Some district leaders also stayed put to await “further instructions” from the city’s People’s Committee, while others wanted to see the benefits of the system in practice before implementing it themselves.
Despite the hiccups, the dedication of most departments in holding paperless meetings and saving expenses for printing has been praise-worthy, said Mr. Quang.
In other news, District 1 authorities are looking into ways to let officials sign documents digitally, potentially allowing them to process documents anywhere without carrying around stacks of paper.