He believed that this reunion will be an opportunity to further tighten the relationship between the two localities. 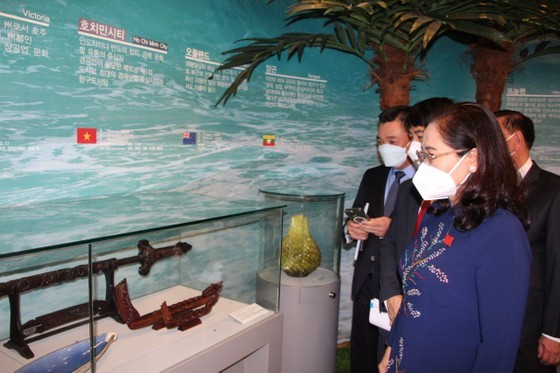 HCMC's officials visit an exhibition room displaying items presenting the relationship between Busan and foreign localities.
For her part, Chairwoman of the HCMC People’s Council Nguyen Thi Le said that the visit aims to mark 30 years of diplomatic ties between Vietnam and South Korea (1992-2022)
She emphasized that based on good bilateral relations, the relationship between HCMC and South Korea has achieved many encouraging results, South Korea is currently the third-largest foreign investor in HCMC, with more than 1,900 valid projects worth a total investment capital of US$5.3 billion.
Trade turnover between HCMC and South Korea in 2021 maintained growth momentum compared to 2020 when RoK was the fifth-large exporter and fourth-large importer of the city.
In addition, the community of around 80,000 Korean people and 2,000 businesses that are living in HCMC has made an outstanding contribution to the city’s development and enhancement of cooperation between the two countries. 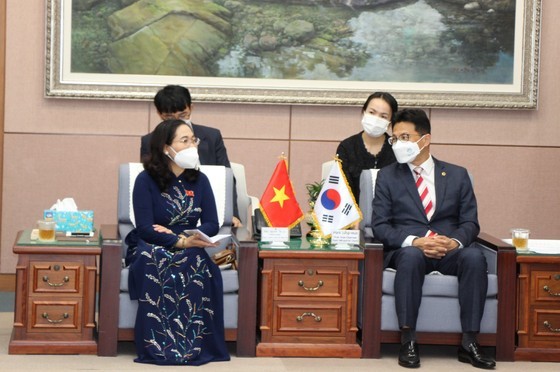 Chairwoman of the municipal People’s Council Nguyen Thi Le (L) and Standing Vice Chairman of the Busan Metropolitan Council
As of now, HCMC has established relationships with seven localities of RoK, including Busan, considered as a typical example in building relationships with foreign localities of HCMC.
In 2021, HCMC's export turnover to South Korea came to US$1.9 billion in the first 10 months while the city’s import turnover from the RoK topped US$3.4 billion. The main import items from South Korea were machinery and electronic components.
There are currently five South Korean investors that have been licensed to invest in HCMC High-Tech Park, including Daeyuong Electronics Vina with a total investment capital of US$63 million, Hannam Electricity with US$74million, Daihan Climate with US$31.4 million, INTOPS with US$80 million, Semist with US$1.4 million and Samsung with US$2 billion. RoK has many official development assistance (ODA) and foreign direct investment (FDI) projects that are carried out in the city.
Chairwoman Nguyen Thi Le hoped that the two cities would further strengthen the cooperation relationship in various areas. On the other hand, Busan City will encourage Korean businesses to seek cooperation opportunities in Vietnam in general and HCMC particularly, and create more exchanges on building smart city between the two sides.
She affirmed that HCMC’s government will always create favorable conditions for Korean enterprises to operate and develop in the city.
The Chairwoman of the HCMC People’s Council also expressed her sincere thanks for the sharing and support taken by the Busan Government in the fight against the coronavirus pandemic in HCMC.
In the framework of the working visit of the HCMC’s leaders to RoK, the delegation will meet leaders of Busan, Seoul and Incheon cities, visit Seoul's Transport Operation and Information Service (TOPIS) and have working sessions with the management board of the Busan Eco Delta Smart City project; Busan Agricultural Technology Center, the Incheon Free Economic Zone (IFEZ). 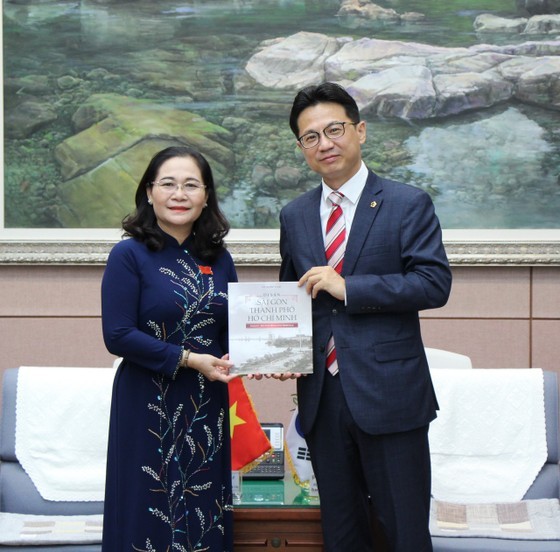 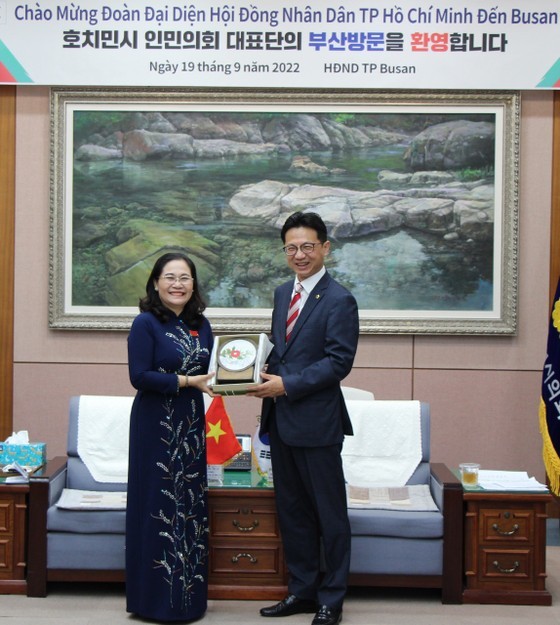