In the group of four socioeconomic contents, there were two reports about two years implementation results of Conclusion No.21 of the Politburo and Resolution 54 of the National Assembly on specific mechanism for HCMC development. Basing on opinions from deputies at the conference, the standing board of the city Party Committee will supplement and compete the reports and send them to the Central Government. The reports will comprise a proposal to increase the ratio of annual budget revenue which the city can keep.

Talking about some achievements in 2019, Mr. Nhan said that the city’s growth is expected to reach 8.32 percent, higher than the previous year. HCMC’s contribution ratio to the national economy continued moving up to hit 23.97 percent, it will reach 24 percent at the end of the city Party Committee’s five year tenure in 2020 if the city is able to maintain growth momentum. The rate was 23 percent at the beginning of the tenure. Aside from that average labor productivity in the city continues maintaining high triple the country.

Budget revenue is estimated to get VND412 trillion (US$17.75 billion), 3.3 percent higher than plan partly thanks to efforts and creativeness by the city’s customs industry. 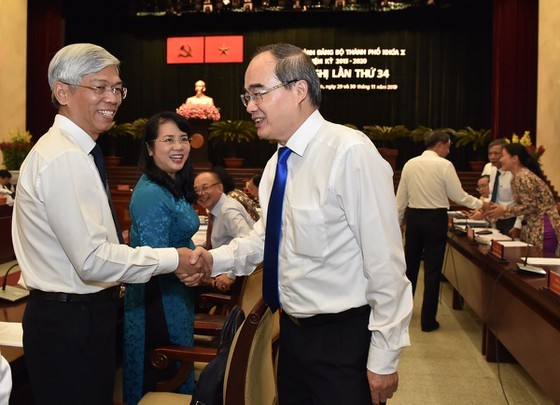 According to the secretary, 2020 is a very important year for the city to fulfill targets set for the entire tenure and prepare work for the next tenure.

He asked deputies to focus on building major contents and programs which will be carried out in the upcoming time in the 11th congress of the city Party Committee. That will help the city have an action program available and start implementation right after the congress wraps up.

Referring to works in 2020 and direction for the next tenure, Mr. Nhan said that the city’s economic sector has seen some changes which should be specified.

In 2005, state capital accounted for 32 percent of investment in the city, private sector made up 51 percent and FDI contributed 17 percent. Still from 2020, the ratio is expected to drop to 16 percent of state capital, the remaining will come from private and FDI sectors.

Hence, the motive power of economic growth from 2020 will be private and FDI firms. Together with planning and policy making, state investment will take a leading role to attract private and foreign investment to develop production for higher growth, he added. This requires to have changes in investment environment, strengthen dialogue with businesses and catch up with social demand and international market.

The city has not taken the initiative in converting the land use purpose to create land fund for development. So, the 95 percent of households have found their own way to shift land use purpose causing rampant illegal construction and confusing planning. Therefore, planning should move toward changing rural districts into urban districts having agricultural production according to a set roadmap.

Talking about construction violations in some localities, the city Party Leader expressed displeasure with some state management cadres breaking regulations and urge competent authorities to to rectify the issue. 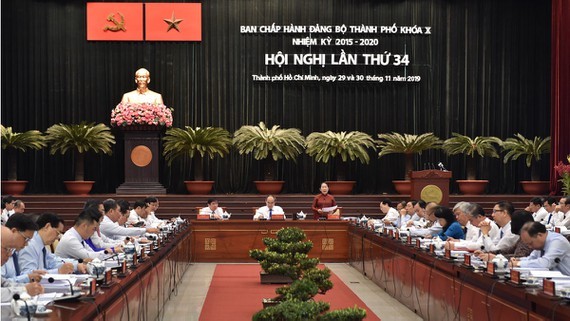 A view of the conference (Photo: SGGP)