The meeting provided a chance for city leaders to listen to the retired military commanders’ opinions for the city development.

On behalf of nearly 70,000 members of HCMC Veterans Association, major general Nguyen Van Chuong said that the meeting showed the city’s consideration and responsibility to veterans, giving an opportunity to review the historic victory on April 30, 1975.

Forty-four years after the south liberation for the country reunification, HCMC has been together with the country implementing the innovation policy, developing and integrating and obtained many comprehensive big achievements. In the city’s development cause, the Veterans Association and especially retired military commanders have clearly showed their role and responsibility to the country’s development and protection, said Mr. Nguyen Van Chuong.

Delegates at the meeting believed that the specific mechanism for HCMC development according to the National Assembly’s Resolution 54 will create breakthroughs and open many resources to develop the city. HCMC has only five years to pilot the mechanism's implementation so they prompted the city to do it drastically with focuses and major points being made clear.

They expressed concern over operation of crimes especially drug related types and expected the municipal authorities to further guidance to deter, prevent and repress these efficiently. In addition, they suggested more care to agent orange victims, completely solving Thu Thiem case and building up a staff of exemplary cadres.

Major general Mai Van Phuc, former deputy commander of the Military Region 7, estimated that the city has thoughtfully cared about the political thought of veterans, invited them to discuss implementation of the Party’s new resolutions and policies. That helped them know their responsiblity as Uncle Ho soldiers and  citizens. 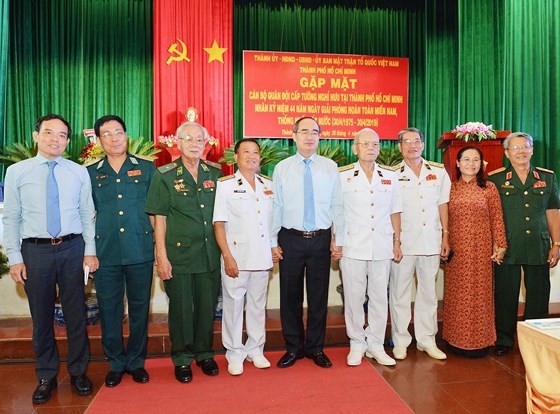 HCMC leaders pose for a photo with retired military commanders at a meeting on April 26 (Photo: SGGP)

The most concern now is the state of speaking a lot with little change, especially to environmental polution and littering in public places. Hence, the city should pay more attention to tackling these problems, Mr. Phuc proposed.

The rerited commanders hoped that the city will quicklly stablize the city’s apparatus from city to grassroots levels to meet requirements of implementing the resolution of the 10th municipal Party Congress.

Expressing his gratitude to the retired commanders for their opinions, Mr. Nguyen Thien Nhan talked to them more about topics of their interest.

The secretary also informed them of outstanding achievements in the city’s socioeconomic development for the last past as well as challenges in development, recorded the great contributions by the retired military commanders and hoped that they would continue giving opinons for the clean and strong devleopment of the municipal Party Committee and the cause of building, protecting and developing the city.