At the meeting, Mr. Nhan said that the cooperation relationship between Vietnam and the Netherlands has well developed in all fields. Especially after the visit by Dutch Prime Minister Mark Rutte in April, the two countries’ bilateral relations have upgraded into comprehensive partnership showing the two sides’ determination in developing their relations in depth.

Trade and investment relations between HCMC and the Netherlands have reached lots of encouraging results. In 2018, total export import turnover between HCMC and the country hit US$1.5 billion. The Netherlands now has 136 investment projects in HCMC with the total capital of US$1.8 billion, ranked 8th in the total of 106 nations and territories investing in the city. Dutch enterprises’ investment in the city is US$12 million a project, much higher than the average level of US$2 million a project.

Mr. Nguyen Thien Nhan referred to the important role of HCMC to Vietnam and emphasized the delegation visit’s purpose of learning experience and opening the premise for digital and knowledge economic development for HCMC. He hoped that HCMC will receive further cooperation and investment from Dutch enterprises.

Deputy Prime Minister Carola Schouten said that the Netherlands and Vietnam has set up the strategic partnership relationship in climate change adaptation, water management and food security. She proposed Vietnam to pay attention to hi-tech agriculture development having the combination of many different fields. 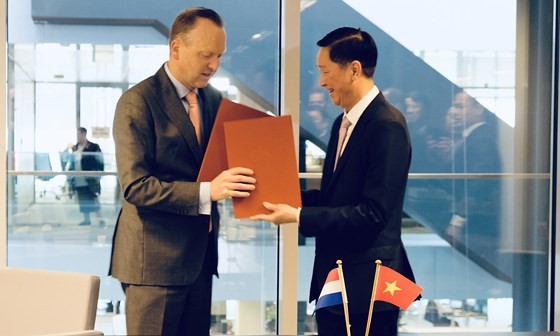 Deputy chairman of HCMC People’s Committee Tran Vinh Tuyen and Mr. Roald Lapperre have signed a Memorandum of Understanding (MoU) on an integrated water resources management program for HCMC (Photo: SGGP)
The Netherlands has been developing knowledge agriculture so the country is willing to share experience with Vietnam and HCMC in this field including the way to create food and foodstuff supply chains with high added value, according to the Dutch deputy Prime Minister.

Previously in the morning on the same day, the delegation met Dutch Deputy Minister of Infrastructure and Water Management (MIW) Roald Lapperre. At the meeting, Mr. Nhan mentioned challenges of HCMC especially population increase because of immigrants, depression and flooding.

“It will be difficult for HCMC to maintain high economic growth rate unless the city tackles flooding and problems from population increase,” said Mr. Nhan. Hence the city has to assist other provinces in economic development to create jobs and increase income for residents besides implementing its own development targets. That aims to ease the population increase pressure on the city.

Asides from that HCMC learns the Netherlands’ experience in solving flooding. According to Mr. Nhan, the Netherlands is in a position of strength in this field.

Moreover, the city wants to learn about digital and knowledge economic development, innovation district development and environmental pollution reduction such as waste to energy and air pollution ease. HCMC also wants to get assistance from the Netherlands in the strategy to develop Can Gio district, accounting for 30 percent area of HCMC, in a manner that will ensure both natural preservation and local resident’s living condition development.

In reply, deputy Minister Roald Lapperre said that the cooperation between the ministry and HCMC has a positive meaning for the bilateral relationship between the Netherlands and Vietnam.

Mr. Roald Lapperre said that the ministry and HCMC has had many cooperation programs in anti-flooding with increasing cooperation level. The Netherlands used to face depression and flooding so the country is experienced in tackling the issue and has technologies to do so.

He affirmed that the Netherlands is willing to support HCMC to burn waste into energy, tackle air pollution and traffic jam. He hoped that the cooperation will deepen the relationship between the ministry and HCMC in particular and the Netherlands and Vietnam in general.

The two sides will together study the status quo of the water supply system in the city and propose a specific project with reference regulations for implementation.

On the same day, the high ranking delegation of HCMC paid a courtesy visit to Ms. Sigrig Kaaq, Minister for Foreign Trade and Development Cooperation.

At the meeting, Mr. Nhan talked about challenges of HCMC and suggested thẻ Netherlands’ assistance and experience sharing in the field of human resource training, waste treatment and depression. He hoped that the Netherlands will give support while and Dutch businesses will join hands in developing Can Gio district in a sustainable way. 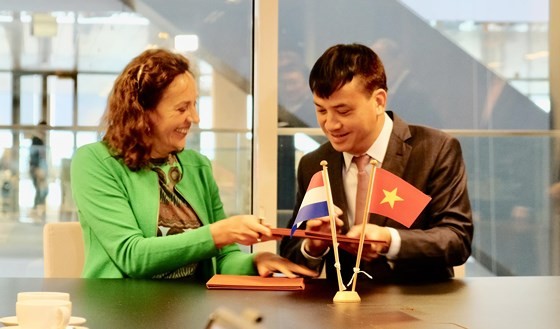 Director of HCMC Department of Construction Le Hoa Binh and MIW representative Ms. Liz van Duin sign a joint statement on the implementation of a Public Private Partnership program for sustainable anti-flooding for HCMC (Photo: SGGP)
Minister Sigrig Kaaq affirmed the importance role of the cooperation between the two countries’ enterprises, especially between firms of the Netherlands and HCMC. The minister commented that HCMC and the Netherlands have some similarities in waterway, port management and agricultural development so she hoped that HCMC and the Netherlands will have specific collaboration programs benefiting the both sides after the visit.