This was a statement of Member of Politburo, Secretary of the Ho Chi Minh City Party Committee Nguyen Van Nen at a meeting between the city Party Chief and a working delegation of Frankfurt led by city Mayor Peter Feldmann.

At the reception, Secretary Nguyen Van Nen expressed his pleasure to welcome the delegation and highly appreciated the visit right after the Covid-19 pandemic situation in HCMC has basically been under control. 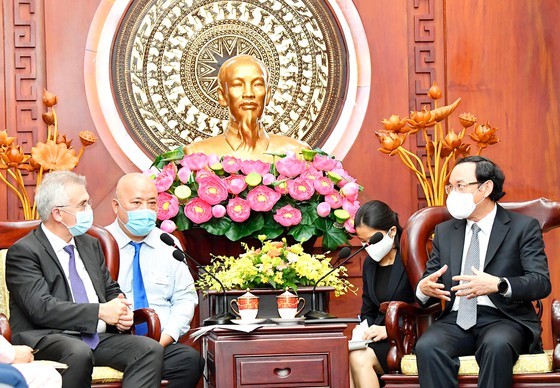 The city Party Chief thanked for the meaningful supports of foreign countries during the complicated Covid-19 pandemic period in HCMC, including a donation of 2.6 million doses of Astra Zeneca vaccine and over 850,000 Covid-19 vaccines through the COVAX program along with medical equipment and supplies.
Mr. Nen believed that the visit was very meaningful as Vietnam and Germany celebrated the 10th anniversary of the two countries' strategic partnership (2011-2021), contributing to boosting the relationship between Vietnam and Germany in general, between Frankfurt and Ho Chi Minh City in particular. Mr. Nen affirmed that with its role as the country’s economic hub, HCMC has been contributing to the economic and trade relation development between the two sides.

On the occasion, Mr. Nguyen Van Nen congratulated the Social Democratic Party of Germany as Mr. Peter Feldmann, who is a member of the party, won the victory on the Parliament Election in September.

The city mayor of Frankfurt expressed his thankfulness for the welcoming and pleasured with many Vietnamese enterprises operating their businesses in Frankfurt such as Vietnam Airlines, VietinBank and Vinfast. Mr. Peter Feldmann said that Frankfurt is the economic and information technology hub of Europe, especially cloud computing with big data and high security.

Frankfurt is ready to share with HCMC the experiences of society, social welfare, people-centered development. Mayor Peter Feldmann said that the city will send delegations to HCMC to promote more and more cooperation in different fields in 2022.