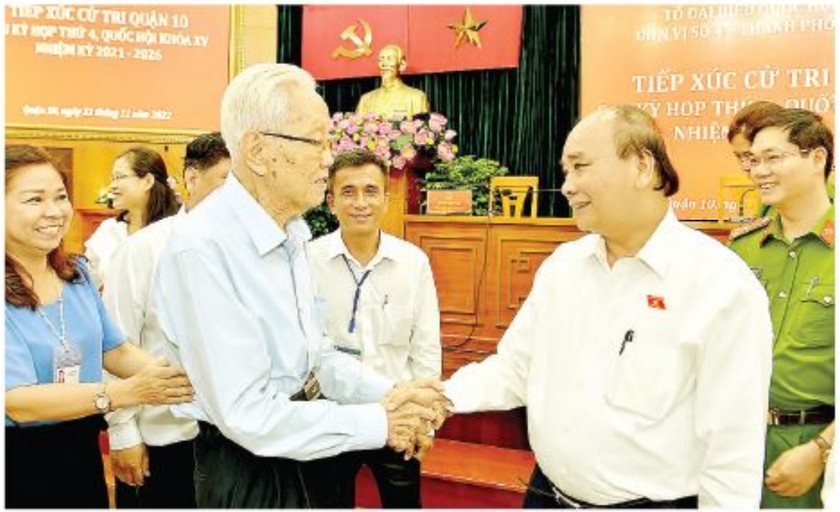 Voter Nguyen Van Tu from Go Vap District mentioned suspended projects in HCMC, some of which have stopped for over 20 years. People living in these areas are not allowed to build or rebuild their accommodation, leading to inconveniences in daily activities. Many other major projects in the city are behind schedule and cost more money.

Voter Le Quang Minh from District 10 informed that there are several damaged apartment buildings in the district (being constructed by 1975), yet no information on renovating or rebuilding them is issued.

Answering the second problem, Vice Chairman of HCMC People’s Committee Ngo Minh Chau said that a task force has been established for the mission of renovating degraded apartment buildings in the city. The team will work with local authorities to assess these sites and identify corresponding compensations for residents there. By 2025, the city will have basically eliminated these decayed buildings.

As to suspended projects in HCMC, Chairman of HCMC People’s Committee Phan Van Mai stated that the city is reviewing all such projects to cancel those no longer suitable for the updated planning of HCMC. The local authorities should first list these projects and then propose corresponding conditions to allow affected dwellers to repair their accommodation to stabilize their life.

The projects behind schedule and thus costing more money are the result of various reasons. Some large-scale ones need a long time to prepare; but due to legal regulations changes, they have had to adjust their documents.

In particular, the 10 kilometers of Ring Road No.2 must be completed by 2026. In 2025, HCMC is going to have Ring Road No.3 in operation. 93 percent of the city’s metro route No.1 (Ben Thanh – Suoi Tien) has been finished, and it is expected to pilot a section of 10km at the end of this year.

Also, the project to fight against urban flooding, costing VND10 trillion (US$402.4 million) has finished 90 percent. If HCMC renews the contract appendix, it should take 2 months to arrange the capital and another 6 months to fully complete the project. Therefore, the investor is allowed to extend the deadline to the end of next year.

The city is requested to focus on budget disbursement for major projects here, invest more on resources, review policies for the staff in the fields of education and healthcare to avoid job quitting, create conditions for businesses and manufacturers to stabilize their operations in order to offer jobs for the unemployed.

Finally, HCMC is asked to finish the draft resolution to replace Resolution No.54 so that the National Assembly can consider and approve it, bringing more chances for the city to bloom in the new context.

As to anti-corruption, President Phuc agreed with voters that there must be stronger, consistent measures, along with amendments of the current institution and policies so that civil servants do not need and dare not carry out such illegal activities. Also, thrift practices should be adopted among civil servants to avoid financial waste.