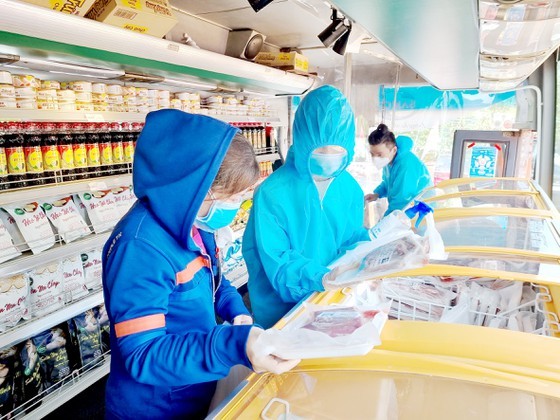 The Wards of 15, 22, and 24 in Binh Thanh District at present are checking crowded neighborhoods and long alleys where densely packed housing units of weak build quality exist to move residents there, especially the senior over 65 years old or those with underlying medical problems, to motels and other temporary shelters. This is a part of the plan to relocate 2,000 citizens in rented rooms and slums for medical safety reason.

Until now, the district has moved more than 890 people in 16 out of 20 wards to Apartment Building 1050 and Thanh Da Union Motel. When coming here, these people first have a quick Covid-19 test. Those with a negative result are then vaccinated and offered a social security package each, along with VND500,000 per person (approx. US$22). Mobile foodstuff stores usually visit them to satisfy their food needs.

Following a similar plan, from the end of July 2021, District 7 evaluated and considered the pandemic spreading risk among rented rooms and slums, especially those in small alleys, rather high. Therefore, the localities decided to decrease the population density in these areas by 50 percent. To achieve this, each ward in the district has mobilized mini-hotels, landlords to temporarily donate available rooms to relocated residents.

Right now, the district is focusing on the group of senior people over 65 years old and overweight individuals. They are moved to 500 rooms in the dormitory of the People’s University of Police (PUP). Here they are given medical care and meals to ensure sufficient social security.

Many other districts in HCMC are also trying to relocate people in their area to reduce the population density. However, this task is not as easy as it seems. The first reason is many available locations have already been used as a field hospital or isolation site for F0 cases.

Chairman of District 8 People’s Committee Tran Thanh Tung confirmed this situation in his district. Thu Duc City is sharing the same fate when it has 58 Covid-19 treatment sites, all of which are temporarily changed from schools, new apartment buildings, and dormitories of Vietnam National University – HCMC as well as other universities.

As a result, even though Thu Duc City has 260,000 workers living in rented rooms, nothing can be done to provide more spacious accommodation for them. The good news is the city has been able to mobilize landlords with available rooms to let F1 cases of far contact with F0s in.

Understanding the space difficulties of neighboring districts, Can Gio District announced that it is ready to welcome people from other areas.

However, Deputy Head of the Mass Mobilization Commission of HCMC Party Committee Ngo Van Luan stated that it is not advisable to move people from one district to another since it might wreak a havoc to their daily life and pose more challenges in management tasks.

Head of the Mass Mobilization Commission of HCMC Party Committee Nguyen Huu Hiep insisted that the relocation of people to reduce population density and Covid-19 spreading can only be done when the temporary shelters are better than their current home. In addition, he agreed with the viewpoint that moving people between districts might do more harm than good.