The HCMC Economic Forum (HEF) was organized by the municipal People’s Committee with the participation of more than 800 local and international experts, including leaders of the World Bank, IMF, IFC and ADB as well as financial experts and leaders of financial centers. They gave new opinions to make the desire of an international financial center come true.
Speaking at the forum, Chairman of the city People’s Committee Nguyen Thanh Phong said the forum played an important role to the city’s future growth. With the theme “ Developing Ho Chi Minh City into a regional and international financial center”, city authorities listened to significant factors from the year forum that will help to turn the dream come true.
Chairman Phong emphasized the role of the HCMC Stock Exchange which was established in 1998. It serves as an important premise for the financial market to steadily grow, contribute significantly to the city’s economic development and call for social contributions.
From 2001, HCMC defined financial market as one of the city’s nine major services to catch up with the world trend.
However, HCMC bumped into challenges and difficulties as the city has low starting point in competitiveness of goods and services. Of 400,000 registered enterprises in the city, more than 98 percent of them are small and medium ones.
Worse, the city population increases by one million every five years while transport infrastructure lags behind population growth.
Additionally, state budget decreases, financial market  is slowly restructured and the scale of stock market is smaller than others in the region. Consequently, the city has seen a fall in economic growth and degraded infrastructure and polluted environment.
These make the city less attractive to investors. Therefore, it has negatively impacted on the target to become a regional and international financial hub.
However, Mr . Phong affirmed city never flinched from becoming a regional and international financial hub despite all barriers. 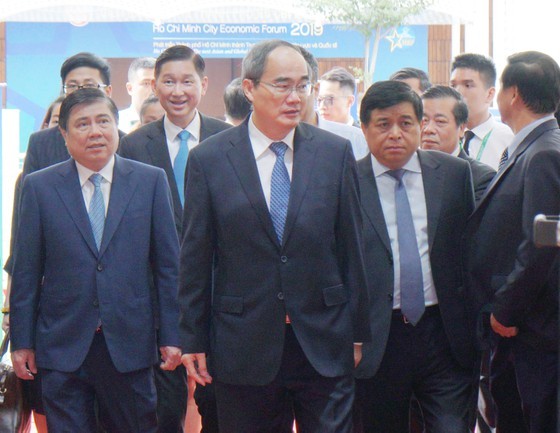 Mr. Nhan ( center) and Mr. Phong( L) at the forum (Photo: SGGP)
City leaders expected to listen to experts’ analysis to make it clear about the city’s strength and point out the shortest way to turn the dream into reality. The city is waiting for the government’s approval of its project to become a financial hub of the world, a prerequisite to continue the project, Chairman Phong shared.
Director of Fulbright University in Vietnam Vu Thanh Tu Anh said to become a global financial center, the city must create a legal framework on the financial sector and new regulatory institutions besides tackling traffic infrastructure problem and shortage of highly skilled personnel .
Speaking at the forum, Secretary of the city’s Party Committee Nguyen Thien Nhan thanked for contributory opinions of local and international experts to help HCMC to complete the project.
According to Mr. Nhan, once HCMC becomes an international financial hub, it will be attractive in the eye of investors because it is the most crowded city in the country and the southern key economic zone. Labor productivity is three times higher than that of the whole country.
Moreover, he said the Southern Key Economic Zone (SKEZ) including Ho Chi Minh City, Binh Duong, Dong Nai, Long An, Ba Ria-Vung Tau, Binh Phuoc, Tay Ninh and Tien Giang  province contributes 45 percent of the country’s whole Gross Domestic Product and 40 percent of export.
However, investment in the city just makes up 27 percent of the whole country. Hence, if city authorities pour more investment in the region, it will grow more bringing more profit for investors.
He added that to turn HCMC into a locally and regionally financial hub, there should have policies to encourage reforms in the finance sector and improve investment environment to meet demand of residents and enterprises. In addition,  the city should implement the smart city project and take heed to man-made intellectual research.
Last but not least, the city should improve traffic infrastructure from now to 2025 and apply smart management. HCMC is implementing 5G technology for digital society development and 5G coverage will be in the city by 2025 , said Mr. Nhan.
With the determination, the city Party Chief affirmed that the city authorities will support investors, enterprises to create healthy and equal investment environment.