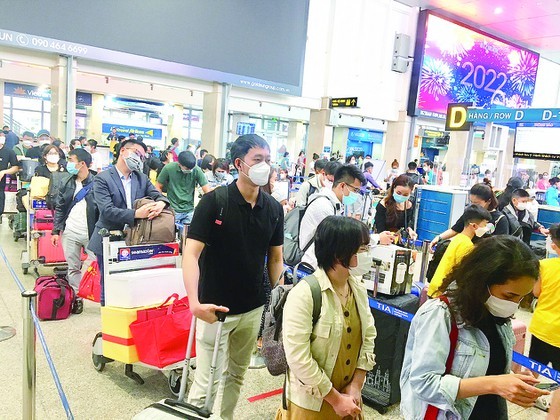 "My family felt assured, so we quickly bought flight tickets to return to my hometown after two years stayed in HCMC due to economic difficulties and the Covid-19 pandemic," said Nguyen Ngoc, a native of Vinh City in the Central province of Nghe An.

However, due to the increasing travel demand, many passengers had to wait because some flights were late. In general, the prices of air tickets to provinces have increased much compared to a week ago, depending on the carrier and flight time. For instance, the prices of a one-way flight in the morning of some airlines departing from HCMC to Buon Ma Thuot City in Dak Lak Province usually ranged from VND700,000 to VND1.5 million, but now have risen to VND1.6 million- VND3 million per ticket. Similarly, evening flights from HCMC to Hai Phong City now swing from VND3.1 million to VND5.6 million per ticket, whereas the airfares were about VND2.5 million per ticket previously.

On January 25, the Civil Aviation Administration of Vietnam (CAAV) informed that it had decided to increase flights until February 16 to meet travel demand during the peak of the Tet holiday. Accordingly, the total number of seats provided during this period is 2.85 million seats with 13,400 flights, equal to 107 percent of the number of seats and 109 percent of flights compared to the previous year.

At present, flights from HCMC to Hanoi, Vinh, Thanh Hoa, Da Nang, Hue, Quy Nhon, and Quang Nam are very crowded. Many flights have occupancy rates from 70 percent to 90 percent. Especially, the HCMC - Vinh route continues to be hot due to excess demand. Currently, the airfares for this route are extremely high.

As for railways, the Vietnam Railways Corporation said that it had just run two more Thong Nhat passenger trains to meet the travel demand of people during the peak period of the Tet holiday. Thus, during the 2022 Lunar New Year, the railway industry has had seven pairs of passenger trains between Hanoi and HCMC, including SE1/2, SE3/4, SE5/6, SE7/8, SE9/10, SE11/12, and SE23/24. The number of train tickets for the Tet holiday sold by the railway industry so far merely accounts for about 50 percent of that in the same period last year. However, the demand for tickets has recently increased by about 2,000 tickets per day.