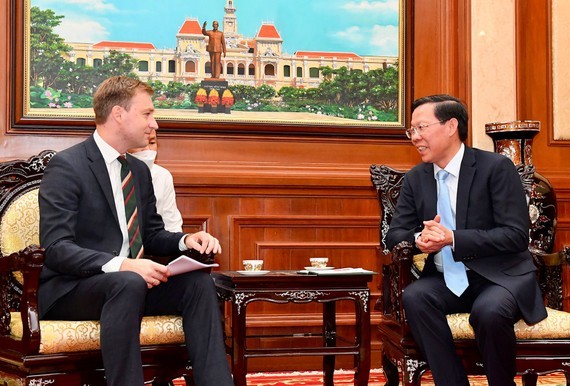 Chairman of the HCMC People’s Committee Phan Van Mai (R) receives Consul General of Belarus in HCMC Ruslan Varankou. (Photo: SGGP)
At the reception, Mr. Phan Van Mai highly appreciated the Vietnam-Belarus traditional relationship. He believed the opening of the Consulate General of the Republic of Belarus will contribute to strengthening cooperation between the two countries and nations’ localities.

The city will create favorable conditions for the Consulate General of Belarus’ operation. This will be a long-term foundation for the development of relationships between two countries in general, HCMC and Belarus particularly, he added.

The city’s chairman said that HCMC and Belarus have much cooperative potential. The two sides need to enhance cooperation in the sectors of trade, investment, culture, education and tourism.

He expressed his honor to welcome the President of the Republic of Belarus who is expected to take a visit to Vietnam at the end of this year.

Regarding the cooperation relation between HCMC and Minsk, the capital and the largest city of Belarus, Mr.Mai noted that the two sides came to an agreement on the cooperation program in the 2020-2025 period, and suggested the two cities implement selected projects.

For his part, Consul General of Belarus in HCMC Ruslan Varankou affirmed that Belarus considers Vietnam as one of the important partners and hopes to develop Vietnam-Belarus strategic partnership. The opening of the Consulate General of Belarus in the city is evidence in regard to the further expanding relations with Vietnam.

He believed the Consulate General of Belarus in HCMC will contribute to enhancing cooperation between Belarus’ localities and HCMC as well as the two nations.

Belarus has prepared many activities for the 30th founding anniversary of the Vietnam-Belarus diplomatic ties this year. Mr. Ruslan Varankou suggested that the two sides will discuss cooperation programs covering areas of public transport and construction of infrastructures as soon as possible.

By Van Do – Translated by Kim Khanh