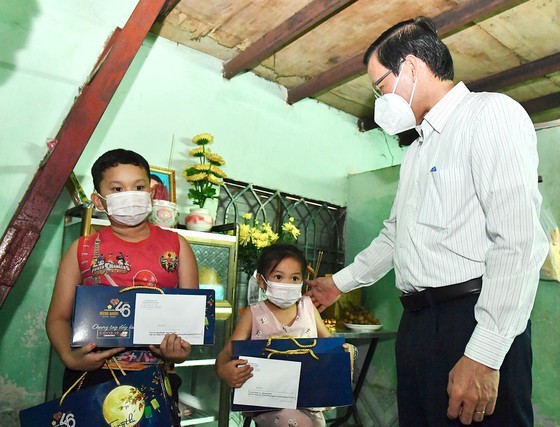 Chairman Phan Van Mai gifts two kids in Binh Tan District’s Tan Tao A Ward (Photo: SGGP)
The chairman disclosed that the city is making a list of kids orphaned by the Covid-19 to have special policies for them.
The chairman dropped by a lease house on Nguyen Cuu Phu Street in Binh Tan District’s Tan Tao A Ward to gift two kids. Their father passed away 2 years ago and their mother has succumbed to Covid-19. Now, the two brothers are living with their uncle in a dilapidated rental room. The uncle is a worker, but now he is also unemployed because of the epidemic.
The children’s caregiver, uncle Nguyen Vu Linh said that it's heartbreaking to see the kids often crying because of missing their mom. Though he is being unemployed, he affirmed that he would be determined to look after the kids well and give them a good education.
On the same day, Mr. Phan Van Mai visited the house of a five-year-old boy in Binh Tan District. The boy’s father was the safeguard of the residential quarter who has participated in the battle of Covid-19 and succumbed to the disease. He was posthumously awarded a certificate of merit by the Vietnamese Prime Minister. 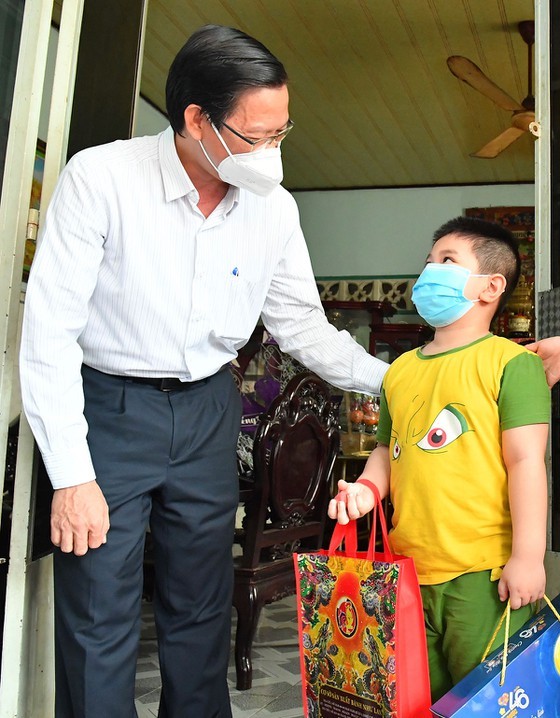 Mr.  Phan Van Mai encourages the boy whose father dies of Covid-19 (Photo: SGGP)
His mom said the father is the breadwinner of the family. After he died, the family has fallen into hardship because the elder son is a sophomore in Van Lang University while the grandmother is 80 years old.
Chairman Phan Van Mai said that the city will grant scholarships to children who lost parents during the fourth wave of Covid-19.
Mr. Mai was dropping in the house of a 13-year-old boy in Binh Tan District. Eight family members have caught Covid-19 and the mother and grandmother succumbed to the disease. His father is being treated in a hospital.
Chairman Mai said that the city will adopt various supports for these children. In addition to scholarships, children may be taken to social centers. They will have access to scholarships till they graduate from a senior high school and continued pursuit of vocational schooling. Moreover, social unions will help them find a proper job.
The chairman also lauded the contributions of individuals and social organizations in taking care of orphans and alone elderly people. He proposed bringing these people into social centers for better care.