Hy Vong canal in Ho Chi Minh City’s Tan Binh District plays an important role in the drainage system for Tan Son Nhat Airport and the nearby residential quarter. However, the canal has been severely polluted for ten years due to a huge waste produced by daily activities leading to blocked drains; as a result, flooding is unavoidable in the area. 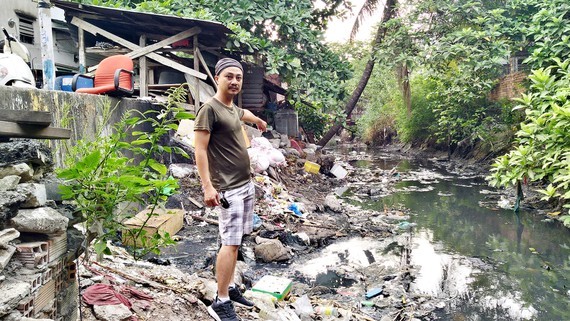 A huge amount of waste including plastic bags, junk, food waste, old desks and tables, animal corps have been dumped or thrown into the canal blocking the flow of canal water. The smell from the black water has been poisoning local people's health. Inhabitant Lan complained that waste blocked the sewer and drainage resulting in floodwater into residents’ houses. She added that she has heard of solutions put forward by city authorities to tackle the problem in media for years ago, but there has been no change so far.
To tackle the severely-polluted canal, the Urban Infrastructure Construction Investment Projects Management Unit proposed a public investment policy on the Hy Vong canal cleanup in its document to the Ho Chi Minh City Department of Construction.
As planned, the project focuses on rainwater drainage against flooding for the canal basin A41, the Tan Son Nhat International Airport and a 51.3-hectare part of the basin.
Moreover, two roads along the canal will be built to ensure convenient traffic for inhabitants, contributing to the city’s urban renewal plan and improving the environment. The cost of the work is estimated more than VND1,980 billion (over US$86.1 million), while over VND1,595 billion will go toward compensating the households who will have to relocate. The project is scheduled to be conducted from 2021 to 2025.
According to Deputy Director of the Project Management Board Nguyen Hoang Anh Dung, the rapid urbanization which is not synchronous with the development of drainage and wastewater treatment systems has worsened the problem in this area.
Tan Binh District’s decades-old drainage system is too old to cope with big rain and over 30 percent of the area has no sewer. Through a study about the living environment of dwellers along the Hy Vong canal, the Urban Infrastructure Construction Investment Projects Management Unit realized that the Tan Son Nhat airport will be partly inundated, causing unsafe flights and polluting surrounding residential areas if the canal upgrade plan is not carried out soon.
The upgrade plan of the Hy Vong canal was approved by HCMC in 2013, but the basic design of the project was approved in 2016. The upgrade plan is a part of the World Bank-sponsored Flood Risk Management Project in the southern metropolis.

However, because of many inconsistent matters, the World Bank announced to stop financing US$ 400 million for the city’s flood risk management project in middle 2017, leading to the halt of the cleanup of the Hy Vong canal.
The Steering Center of the Urban Flood Control Program HCMC petitioned for the municipal People's Committee’s approval of the investment policy towards the Hy Vong canal project, with a budget of about VND150 billion in 2018. However, the project has not been in the middle of construction because of the compensation problem, land clearance and some formality barriers.
Presently, the Asian Development Bank is considering sponsoring some items of the city’s flood risk management project, the upgrade plan of the Hy Vong canal continues to be put forward.