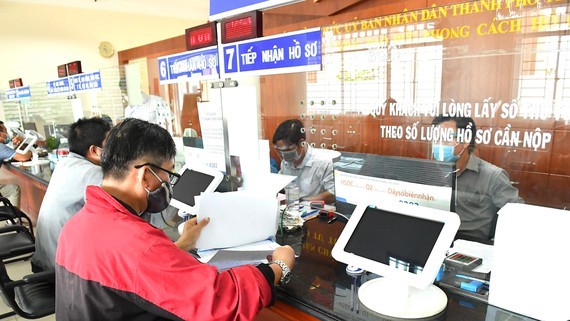 Ho Chi Minh City is the first centrally-run city in the country to implement an urban administrative model to bring into practice a ‘city within a city’ model -Thu Duc City for the implementation of urban government.
Chairman of Thu Duc City People's Committee Hoang Tung said that Thu Duc City’s mission is to build an urban government, so since the early days of its establishment, all activities in Thu Duc City have all centered around this task. Currently, the apparatus of Thu Duc City is operating stably.
In particular, Thu Duc City is focusing on the proposal of appropriate mechanisms and policies for development to Ho Chi Minh City. Thu Duc City has just launched the IOC Smart Operation Center in Thu Duc City which has been collecting data.
According to Mr. Hoang Tung, when it was established, Thu Duc City had a fragmented data situation, lack of connection and unity. IOC Thu Duc City will address the expectation of building a unified data system, linked with industries to be able to analyze interdisciplinary in a multi-dimensional way. From there, it will help to increase the interaction between the government and the people, between the government and businesses; and prepare data to forecast future trends.
The most important task of Thu Duc City’s IOC is to help administrative simplification reform with an orientation of provision of online public services to facilitate residents and businesses. From now until the end of the year, Thu Duc City will strive for 50 percent of public administrative procedures to be served online at level 4 and continue to accelerate this component, Mr. Hoang Tung emphasized.
Prior, District 7 had launched the Center for Operations and Control of the Covid-19 epidemic and urgently started to restore the local economy. The district focuses on building e-government, smart cities, developing digital economy, digital society, digital transformation in various fields. Currently, District 7 has provided level 4 online public services in more than 190 sectors.
Chairman of the People's Committee in Go Vap District Nguyen Tri Dung affirmed the implementation of the urban government model and increasing online public services will help facilitate dwellers.
To ensure transparency in all activities of people’s committees in wards and districts, the city authorities decided to delete people's councils of districts and wards; the southern largest city had to arrange employees who used to work for people's councils of districts and wards to new positions.

Up to now, the arrangement of 266 positions including 18 vice chairmen of the district people's council, 29 deputy heads of the specialized committee of the district people's council, and 219 vice chairmen of the ward people's council seemed completed.
In particular, a dialogue between chairpersons of people's committees of districts and wards and residents must be held periodically where chairpersons will publicize all activities of the district and wards and issues related to dwellers.
However, Ho Chi Minh City was hit by the fourth wave of the Covid-19 pandemic; as a result, the city authorities had no choice but applied three-month social distancing to fight the epidemic; therefore, local administrations have not held dialogue sessions between chairpersons of people's committees and inhabitants yet.
It is scheduled that Go Vap District will hold a dialogue between district leaders and people in early December 2021 before the year-end meeting of the People's Council of Ho Chi Minh City takes place.
Chairman of the Go Vap District People's Committee Nguyen Tri Dung informed that the Fatherland Front will take residents' opinions through meetings and dialogues between the people and the government for monitoring.
Chairwoman of the Ho Chi Minh City People's Council Nguyen Thi Le said that she has developed a project to improve the quality of supervision activities of the municipal People's Council in the context of implementing urban government for the 2021-2026 term.
Along with that, the city will promote the supervisory role of the Fatherland Front Committee and political organizations at all levels. The project on enhancing the role of the Vietnam Fatherland Front and the people in supervising party organizations, party members and activities of governments at all levels in the city in the 2021-2030 period was also approved.
The southern metropolis is organizing a peak month to implement the 2021 themed The year of building urban government and improving the investment environment.

In the peak month, the city plans to organize meetings and dialogues between city leaders, heads of departments and agencies, and businesses to discuss businesses’ difficulties and how city authorities will help them to remove their difficulties for improvement of production capacity. Direct and online investment promotion will be organized in conjunction with international organizations to attract foreign direct investment. Additionally, the second Ho Chi Minh City Innovation Award ceremony in 2021 will be held.
In particular, there will be a special week to receive and administrative-related documents will be solved on the same day. No dossiers are solved late in the peak month.